God of the Living

Have you ever talked to a child—I mean, a really small child, like a preschool kid—about what they imagine their life will be like when they grow up? They might be able to imagine being a firefighter or a doctor, because they see adults around them at work. But one thing they have an incredibly hard time doing is imagining themselves forming new families of their own. Of course they’re always going to live with mommy and daddy. We giggle a little bit if they say they’re going to marry a parent or a brother or sister, but there’s no need to page Dr. Freud. It’s just that they can’t picture a life twenty or thirty years from now that could be any different from the only home, the only family, the only relationships they’ve ever known.

Today’s gospel story is about a similar failure of imagination. It’s about resurrection, and whether our hopes for the future God is creating have to be anchored and constrained by the injuries and injustices of the present. The Sadducees tie their hopes and their trust to the way things are in the here and now. They concoct an absurd story—but one which, if it did take place in the way they describe—would involve incredible heartache and suffering, and they try to use that story to deny the possibility of a redeemed future. On the other hand, Jesus reaches back into the actual, lived story of God’s people, anchoring his own hope in the God who dares to make audacious promises, and his trust in the faithfulness of God in carrying them out. In doing this, Jesus invites us to let resurrection and the creative power of God drive our imagination about what is possible, not just in the next life, but in this one as well. God is not the God of a story that dead-ends in grief and heartbreak. God is not the God of the dead, but of the living. 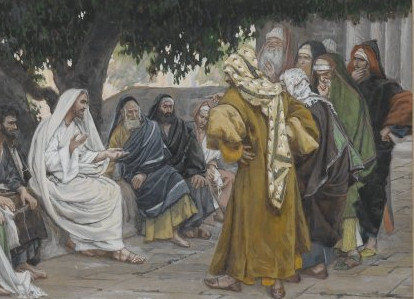 Detail from James Tissot, “The Pharisees and the Sadducees Come to Tempt Jesus.” Watercolor, 1886-1894.

Let’s back up for a moment, though, because first we need to understand something about the people Jesus is speaking with. The Sadducees represent the upper crust of Jerusalem society. The first-century Jewish historian Josephus says that it was the wealthy and well-connected that adopted their teachings. And that makes sense, because the Sadducees taught that this life was all there was. Once you die, that’s it, they said. You might live on through your children, or by doing good or great things that people remember, but you won’t be there. They seem to have been connected with the sacrificial worship that went on in the Temple. They looked down on the Pharisees and their synagogues, where the holy mystery of God’s Law was taught to the unwashed masses. But above all, as the story reminds us, they denied the resurrection as a false, vain, naïve hope for losers who weren’t ambitious or rich or powerful enough to make this life really count.

So the Sadducees come up with a silly story. I feel as though I need to say right from the start that this scripture is not about whether you get to be with the people you love in the next life. Because I know some people have read this text, and they’ve come away with the idea that if they hope to be reunited with a spouse who has died, that Jesus is telling them they’re wrong. That’s not what Jesus is talking about here. Let’s remember that in Jesus’ time and all the way into the seventeenth or eighteenth century, people didn’t get married for love. Your spouse wasn’t meant to be primarily a soul-mate or life companion, but a business partner, or someone to bear or provide for children, or a bridge connecting your family to theirs, or even a means of transferring or sharing property. So marriage wasn’t about soul-mates. It wasn’t about romance. It was all wrapped up in the economics and politics and relationships between clans, and all the rules that surround these things. And what Jesus and the Sadducees are talking about is whether those things would continue in the next life.

According to the Law of Moses, if a married man died before the marriage had produced any children, his wife was to be given to his brother. This arrangement was called levirate marriage, and it had two purposes. The first was to ensure that widows were cared for. Women had few economic opportunities in the ancient world, and there was no life insurance or any kind of security if the family’s provider died. So this law ensured that the childless widow would have a roof over her head and food on the table. But there was a second purpose too. Any children born to the brother and the widow would be considered sons of the dead man, and they would inherit his property. So this arrangement allowed for the transfer of wealth from one generation of men to the next, to ensure that the dead man’s property stayed within his family, and wouldn’t be taken by another man. But all this is premised on the assumptions that men get to control the property, and that men get to decide what happens to women. And if you accept those assumptions as fixed and unchanging, as continuing on forever, then yes, levirate marriage is compassionate, because it protects someone like a widow who is exceedingly vulnerable in that world. But it doesn’t take much imagination on our part to see that it doesn’t have to be like this, because our own world is very different!

So how absurd is it for the Sadducees to assume that this is the best God can do! How uncreative and unimaginative for them to claim that of course if there is a next life this is how things would have to work! And then like some kind of smug high school debater, they say, “Look, Jesus, this would mean that you’d have a woman with six husbands. That would be bad and wrong, right? So ergo, ipso facto, QED, there is no resurrection. C’mon, don’t leave me hangin’! High five!”

It’s a clever argument, but as Jesus points out, it presupposes that all the brokenness, all the injustice, and all the accommodations we make for these things must carry over into the resurrection life.

“Jesus, in the resurrection, how will we show our generosity, if no one is poor?”

“Jesus, in the resurrection, how will soldiers show their bravery and loyalty to their comrades, if there is no war?”

“Jesus, in the resurrection, how will doctors earn a living, if there is no sickness?”

All these things are band-aids. They’re accommodations to the unfortunate hurts that are present in this life, hurts that exist precisely because this world is not perfect, because it doesn’t reflect the shape God designed for it, because it is distorted by human sin and all the consequences that flow from it. And yes, even God’s Law, even the Teaching given to Moses, contains band-aids intended to make life more bearable in a fallen world, to take away some of the pain. They’re necessary in the here and now, but when we assume, as the Sadducees do, that they’re permanent and unchanging, then we give up our faith in God’s ability to do a new thing, to give birth to a new heaven and a new earth.

But Jesus doesn’t give up, does he? No, he teaches us to pray to God, “thy will be done on earth as it is in heaven.” He teaches us not to shoehorn our vision of the resurrection life, the perfected life, the kingdom God is creating into the narrow and twisted mold of the present day. He teaches us to do the reverse. He teaches us to align ourselves first with the future God is creating, to pray and hope for that future, to point and bear witness to it, and to create little pockets of it where we can, understanding that only God can bring God’s kingdom to completion.

So part of our role as a church is to imagine. It’s to imagine the world God is creating and to let that new world be seen, and not simply to accept the world we inhabit today. Doing ministry that directly benefits those in need is a part of that. That’s why we work with the Center for Food Action and the Family Promise homeless shelter. But there’s more we’re called to do.

Retired Archbishop Desmond Tutu of South Africa told a story where he likened this kind of ministry to someone who walked alongside a river, and who kept noticing that people were drowning in that river. So the man kept charging into the river to save the drowning people, pulling them ashore. But Tutu says, “There comes a point where we need to stop just pulling people out of the river. We need to go upstream and find out why they’re falling in.”

The Presbyterian Church recently announced something called the Matthew 25 initiative, based on the passage of scripture where Jesus describes how people will be judged based on what they have done for “the least of these.” And two of the focus areas for this work are dismantling structural racism and ending systemic poverty. Both of these are part of an effort to recognize that it is not God’s will, God’s intention for our world for so many of our brothers and sisters to be falling in the river. It’s an effort to go upstream to discover the conditions that are causing them to fall in, and to change them. It’s why Presbyterians marched for bail reform at the last General Assembly and delivered $48,000 in offerings to release nonviolent pre-trial defendants from jail in St. Louis.

Where are you, in your own community, your workplace, your life, finding people are falling into the river? What can we as a church do to help them keep their footing? What can we do to make this present life look more like the life of resurrection?

As believers in Jesus, we are witnesses to the power of resurrection. We carry the story of Jesus’ own resurrection, a story of hope laid low in the grave that rises again. We carry our own personal stories of God’s new beginnings in our lives—guilt forgiven, relationships restored, addictions overcome, and all kinds of new life taking root and growing. But this story also has the power to transform the world we live in. God is not the God of the dead, Jesus says, but the God of the living. God is the God of a people who live for resurrection here, now, today, whose lips and hands move to the words, “thy will be done, on earth as it is in heaven.” Amen.