If These Were Silent

It’s funny how being a parent changes your perspective on everything. For example, as I read the Palm Sunday story this year, I find myself feeling a lot of sympathy for the Pharisees. It’s my job to see danger everywhere—don’t run into the street, don’t use the uppermost bleacher in the stands as a balance beam, don’t eat that Goldfish cracker that you just picked up from the dirt. When it comes to your kids’ health and safety, there’s so much left to chance as it is that you find yourself going hard after the stuff you can actually control. So I feel like we’re kindred spirits. In this story, they’re the responsible adults.

One thing that’s absolutely clear from the Palm Sunday story is that what Jesus is doing would have been seen as a provocative political demonstration. You see this in his cloak-and-dagger preparations, where the disciples have to give a secret password as they retrieve the donkey he’s arranged to ride in on. You see it in the way his followers spread—depending on what version of the story you read—their cloaks or branches or whatever along his way. This was the first-century equivalent of rolling out the red carpet for a powerful leader. And you see it in the words of the psalm they sing, which are meant to welcome a king home from a victorious conquest. 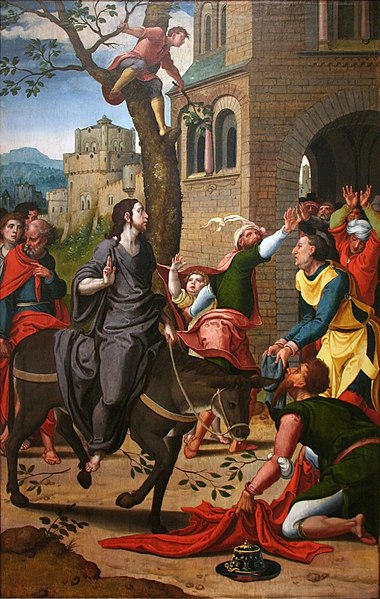 Pieter Cocke van Aelst, “Entry of Christ into Jerusalem,” oil on panel, circa 1530.

The Pharisees see all of this going on, and it gives them ulcers. We’ve already heard, a few weeks ago, that at some previous Passover festival, the Roman prefect, Pontius Pilate, had slaughtered Jewish pilgrims who had come to offer sacrifices in Jerusalem. Passover was a sensitive time in Jerusalem, as Jews came to commemorate their liberation from slavery in Egypt, and so the Roman governor was in town with a detachment of soldiers, just to keep an eye on things. The Pharisees understood that Pilate would not have a sense of humor about it, if he caught wind of Jesus’ procession. Jesus was playing with fire, and they were all liable to get burned.

So they complain to Jesus. Make these people stop singing! they plead. Make them stop spreading their cloaks and waving their branches! Somebody’s going to get the wrong idea, Jesus, and it’s not going to end well for you or for us.

I get it. When you’re a parent or a religious leader, you’re in a position of responsibility. You’re supposed to protect, preserve, defend the people and the institution and the traditions that have been entrusted to you. You can’t let the crowd run wild with their expectations that Jesus is the messiah, the God-anointed king. You can’t let them imagine that everything could be radically different. You can’t risk it. Because that way of thinking, that way of living, is how you lose everything.

But, from the perspective of the Pharisees and anyone else with a shred of responsibility, what Jesus does next is absolutely astounding. He dismisses their worries, whimsically pointing to the loose, jagged stones scattered in the Kidron valley, and saying, “If these were silent, the stones would shout out.”

There are a couple of lessons we are meant to take from Jesus’ actions on Palm Sunday. The first is that the confrontation that leads to Jesus’ death is not an accident or a tragic misunderstanding. It happens not by mistake, but because Jesus, through the symbols he chooses for himself, is deliberately provoking the authorities to respond. This is a choice. He knows what he is doing. He is not a naive country bumpkin who gets caught up in a political web he doesn’t understand. Jesus is laying down his life freely, of his own accord.

But the second lesson, and where I want to focus our attention today, has to do with Jesus being protective of his disciples’ joy. Yes, their joy! Last week we heard Jesus speaking up for Mary, the sister of Lazarus, who out of love poured out her expensive perfume on Jesus’ feet. The week before we heard him tell a story about a father generously welcoming home a son who had squandered his share of the inheritance and throwing a party in his honor. Time after time, Jesus rejects those who want to be sensible, who want to be fair, in favor of lavish generosity, forgiveness, and celebration. These are the very same Jubilee values Jesus began his ministry with. The old rules are set aside, because this is a time for canceling old debts, forgiving sins, and beginning afresh. That’s what the kingdom of God is, according to Jesus.

What that first Palm Sunday procession looks like is what you get when you decide you’re going to live in the reality of God’s kingdom here and now. It’s what you get when you claim Jesus as king, unabashedly and forthrightly. It’s what you get when you bring Jesus’ kingship right up in the face of others—like Pontius Pilate, like the political and religious establishment in Jerusalem—who want to claim that their rule is absolute. And it looks like a great party! There’s dancing and singing and pageantry, and to me it looks like they were all having a blast. Now, maybe what we are seeing is the disciples’ ignorance about how the story was going to play out. It could be that they are joyful because they failed to see the looming shadow of the cross. On the other hand, the Pharisees are the ones who (accurately!) see danger lurking, and Jesus rebukes them. Jesus commends, Jesus speaks up for, Jesus defends those who live in the joy, rather than those who see the danger.

What does it look like today for Jesus’ followers to be firm but joyful, as we try to embody God’s kingdom?

Evangelical Pastor Jim Wallis tells a story about Desmond Tutu, one of the leaders in the struggle against apartheid in South Africa. "... When the government canceled a political rally against apartheid, Desmond Tutu led a worship service at St. George's Cathedral. The walls were lined with soldier and riot police carrying guns and bayonets, ready to close it down. Bishop Tutu began to speak of the evils of the apartheid system--how the rulers and authorities that propped it up were doomed to fail. He pointed a finger at the police who were there to record his words: 'You may be powerful--very powerful--but you are not God. God cannot be mocked. You have already lost.'"

"Then, in a moment of unbearable tension, the bishop seemed to soften. Coming out from behind the pulpit, he flashed that radiant Tutu smile and began to bounce up and down with glee. 'Therefore, since you have already lost, we are inviting you to join the winning side.'"

"The crowd roared, the police melted away, and the people began to dance."1

In that church that day there was honesty about who God is and the world God is making—a world with no room for systems where people of one race or color or ethnicity dominate and oppress people of another. There was danger, embodied by the South African police whose job it was to uphold the system God wanted torn down. But there was also playfulness and joy.

And in case you can’t imagine Presbyterians in this country doing something remotely similar, remember that just last summer at our denomination’s General Assembly, those who gathered in St. Louis went on a march to end cash bail. The organizers were originally worried about not having the proper permits, and the lawyers warned that if they marched without authorization, they could be arrested. But in the end they marched anyway, bringing $47,000 to the county jail for the release of those held on accusations of non-violent offenses. It was a joyful and effective expression of solidarity with those held in jail simply because they were poor. Presbyterians took a minor risk to embody in a very real and present way the good news for the poor and release for captives that Jesus told us he was anointed to proclaim (Luke 4:18-21).

What other risks is Jesus calling us to take in our churches, in our communities? What other opportunities are there, right in front of us, to put flesh and blood on the Gospel? What would it look like to embrace these opportunities without hesitation, without fear, and with joy? What risks have you been shrinking from? Can you find the courage and the joy it takes to live out the good news the way Jesus does here?

The danger is real, for Jesus and maybe for us. In the coming week, the powers that Jesus is confronting here will do their worst, and those who follow him will have to have their joy and their hope crushed before it can be raised again with Jesus. That’s an inescapable part of his story.

But here and now, it’s for us to shout with our lips and our lives, “Hosanna! Blessed is the one who comes in the name of the Lord!” If we are silent, the stones will shout...