Peace Be With You

I’ve been marveling this past week over some lines from John Updike:

Make no mistake: if He rose at all
it was as His body;
if the cells’ dissolution did not reverse, the molecules
reknit, the amino acids rekindle,
the Church will fall.1

This is the beginning of Updike’s poem, “Seven Stanzas at Easter.” In it he blends together the cosmic, otherworldly story of Jesus’ resurrection with terms taken from biology, chemistry, and even quantum physics. It’s jarring to see these words from such different categories thrown up against each other, and my immediate reaction is to think, “But that’s not what those words are for!” Science is for investigating the realities we can see and touch and manipulate here and now, and it feels like an abuse of its language to apply it to a long-ago miracle at the center of the Christian story. But then I realized that this is the whole point of Updike’s poem.

Let us not mock God with metaphor,
analogy, sidestepping, transcendence;
making of the event a parable, a sign painted in the
faded credulity of earlier ages:
let us walk through the door.

The resurrection of Jesus is a powerful story about the persistence of God’s love through the worst that can happen to us. But if it’s just that—if it’s just a story, just a metaphor, just the grasping of an ancient people using the language of myth to describe a timeless reality—if it never touches down in the messy particularity of my life and yours, then the resurrection itself has passed us by. So by all means, let’s talk about the rekindling of the amino acids in Jesus’ broken body, the firing of electrical impulses in his neurons again days after they had grown quiet. Let’s talk about a real body, and guess at how many pounds it weighed. Let’s imagine the shadow it cast in the sunlight, and the hair and skin cells it shed as Jesus spoke with the disciples in their locked room.

In our gospel passage today, Thomas was not content with second-hand reporting. How much less would he have embraced the resurrection of Jesus as a metaphor or a meaning-making myth? “Unless I see the mark of the nails in his hands,” Thomas said, “and put my finger in the mark of the nails and my hand in his side, I will not believe.” What an amazing, intimate demand to make! It’s not good enough for Thomas to see Jesus, as if he were some kind of apparition or ghost or shadowy vision. For Jesus to be risen and alive for Thomas, he has to be a body that can be held and touched. And not only that, he has to be recognizable by the very wounds that he suffered as he laid down his life. Why might Thomas have made such a demand? 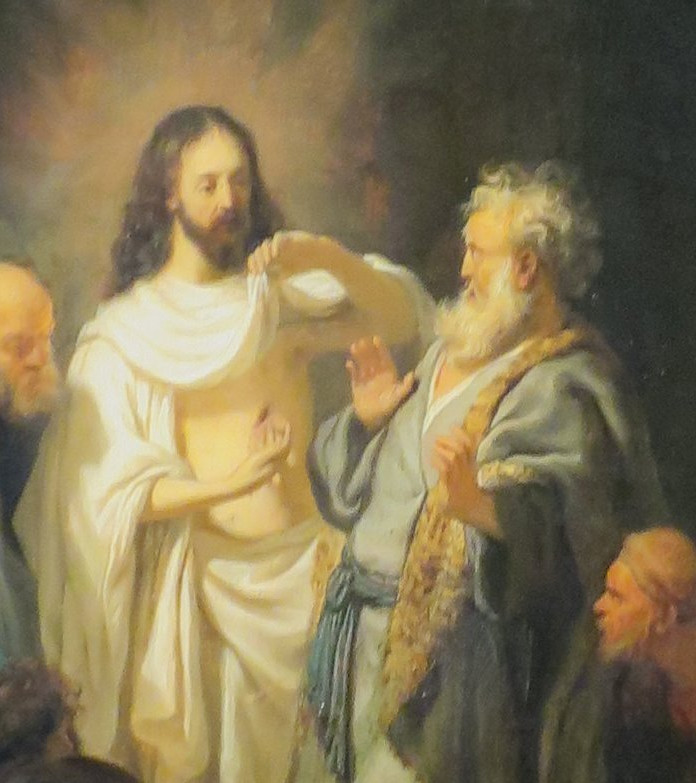 Detail from Rembrandt’s “The Incredulity of St. Thomas.” Oil on wood, 1634.

In the gospel of John’s telling of Jesus’ story, Jesus is an amazing, sometimes otherworldly figure. In the very beginning, John describes Jesus as the pre-existent Word of God present at the creation of the whole universe. But very quickly John affirms that the Word became flesh and lived among us, full of grace and truth, and that it is in the Word made flesh that we receive grace upon grace, that no one has ever seen God, but Jesus—God’s Son in the flesh—is the one who reveals God to us. So often people talk about this story about Thomas and his doubts as though it’s an indication of some kind of failure on his part, that Thomas should have believed. But really Thomas is just reminding all of us about the central truth of the whole good news of Jesus—that his ability to bestow grace and show the very heart of God to us rests on his life in the body. And we see this throughout the gospel story, don’t we?

When a multitude of hungry people gather, Jesus works a miracle. You could imagine him doing something spiritual and otherworldly here. He might have said something like, “I’m going to feed these people with the Word of God,” and then through some otherworldly power, the people’s hunger would dissipate and they could continue without food as they listened to Jesus. But he doesn’t do that. Instead, he blesses and breaks bread for them, and they sit down and eat. They aren’t eating words or a metaphor or a principle, either, but bread and fish, the sugars and proteins breaking down in their bellies and entering their bloodstream and fueling their bodies. The five thousand men and uncounted thousands of women and children whom Jesus fed received grace upon grace not through the operations of their minds and spirits, but in their bodies.

And likewise, when Jesus healed a blind man, there was plenty of talk about spiritual sight, and how Jesus is the light of the world. But maybe you remember exactly how Jesus healed the man… he spit in the dirt and wiped the mud on the man’s eyes. Grace upon grace came physically to this man, in his body.

And when Jesus, on that night before his arrest, commanded his disciples to love one another, he didn’t say this as an abstraction, an aspiration, a sentiment. No, he got down and washed the dirty feet of those disciples, holding them and caring for them in the flesh—even the feet of Judas, the one who betrayed him. Because love—the kind of love that God has for us, and the kind of love we’re meant to share with others—is not a feeling, not an idea. Love is tending to the bodies of our friends, our neighbors, and even our enemies. Love one another, Jesus says, but in the flesh. That’s where grace and truth are to be found.

So Thomas is not out of line when he demands to touch the body of the risen Jesus. If he is going to be moved from sadness to joy like his brothers, if there is redemption, grace, good news in the ultimate end of the story of Jesus, then they are not going to be found in myths or visions or abstract sentiments, but in the physical presence of the real-life, flesh-and-blood Jesus. Because Jesus is the Word made flesh, the heart of God in human form. That’s not an incidental detail to the story, but the whole point. Jesus came so that we might have abundant, abiding life—not in theory, not in the abstract, not someday, somewhere else—but in our bodies.

Thomas does not appear in this story in order to be a proverb and a byword about doubt, but as the hero who demands that the story of the good news of Jesus must have an ending faithful to the beginning and middle. Sure, Jesus commends those who will come after him: “Blessed are those who have not seen and yet have come to believe.” But it’s possible to hear this as acknowledging how hard it is to believe without seeing and touching and holding Jesus.

Why is this so important? Why does Thomas insist on touching Jesus’ body? Why does John Updike insist on the solid chemical and biological reality of the risen Jesus? It matters because bodies matter, to God and—hopefully—to us as well. There are religious and spiritual traditions in the world that downplay the importance of the body, that say it’s an illusion, or that it doesn’t matter as much as the mind or spirit. But that’s not what our faith says. For Christians, bodies matter, because Jesus came to us in flesh and rose in flesh.

Last Sunday our Christian brothers and sisters in Sri Lanka had come to church just like we had to celebrate Jesus’ resurrection, when a series of bombs tore through their churches and the bodies of worshipers gathered there. These members of our spiritual family in the worldwide church suffered in their bodies. What do you say to people who are hurting like this? That their loved ones live on in spirit? That they exist somewhere else, that they belong to the universe now? If bodies matter, then the absence of those we can no longer hold or touch is a real hurt that matters to God. If bodies matter, then the resurrection means we will see and hold them again.

But there are everyday consequences too. In this church we support the Center for Food Action with our donations of non-perishable food, and that’s one way of caring for the bodies of hungry neighbors. James, the brother of Jesus, famously writes that you can’t truly claim to have faith if you wish your neighbors well but ignore their bodily needs for warmth and food. But this month we also donated over 60 Easter baskets to children whose families are served by the CFA, and there’s no practical or sensible explanation for giving candy to children except that it brings them bodily delight. The bodies of our neighbors matter. They matter to God, and therefore they matter to us.

There are other religious traditions where bodies don’t matter. And sometimes Christians too have been guilty of putting their faith in a God they believe will rescue them from their bodies and from a broken and hurting creation. You can probably work out for yourself what the consequences are, if you believe you’re carrying a throwaway body through life in a throwaway world. But the message of Jesus’ resurrection is that bodies matter, that life in this world matters. It’s the bookend to a story that began to unfold with Jesus’ incarnation and birth, his coming in the flesh. Jesus is God’s Yes to our bodies, to the physical creation that God made and called very good. His resurrection is the sign that God intends to redeem our bodies and our world—that they matter, that they are worthy of honor and love.

“Peace be with you,” says Jesus, as he breathes on the disciples. “As the Father has sent me, so I send you.” Jesus, the Word of God made flesh is sending us to bear the good news of God’s grace, God’s forgiveness, God’s abiding love and commitment to us and our bodies and this world—to bear the good news in our bodies, through arms that embrace, hands that heal and share burdens. Peace be with you is at the same time a comfort and a command, because it means that we are the body of Christ, that we are the ones who need to show up if others are to believe and rejoice as Thomas did.

So may the peace of Jesus Christ be with you today. May you experience the risen Christ in the bodily presence of his caring people, gathered together in community. May you carry the resurrection with you, as you leave here to heal and forgive your own neighbors. And as we witness the resurrection at work, may we believe and come to have life in Jesus’ name. Amen.