Where do you go when you’re stressed out? What do you do? Some people go for a run. Some people clean house. Some retreat to their wood shop in the basement. Me, I take the dog for a long walk. These are pressure valves we can turn when life is overwhelming, or the way forward isn’t clear.

For Peter, it was fishing. That’s how he made his living, before he met Jesus. I imagine he was pretty good at it. He knew the Sea of Galilee—the currents, the deeps and the shallows, the shoals where fish gathered to feed at night.

What happened during Holy Week, and in the days after, had shattered everything Peter had known. In the Upper Room, as Jesus gathered his disciples on the night of his arrest, Peter had boasted that he would follow Jesus anywhere, that he would lay down his life for his friend and teacher. And he tried. In the garden where Jesus was arrested, Peter drew his sword and injured one of the men who had come for Jesus, before Jesus ordered him to stop. And after Jesus was taken by the soldiers, Peter followed him to the home of the high priest, where he stood warming himself by a charcoal fire. But three times, when he was asked whether he was a disciple of Jesus, Peter answered, “I am not.” See, this wasn’t just a betrayal of Jesus. Peter was denying not only Jesus, but himself—he was denying his identity as a disciple.

Last week we heard about the risen Jesus appearing to the disciples and giving them the Holy Spirit, commissioning them to carry the presence and power and love of God in their bodies, just as Jesus had. But something didn’t sit right with Peter. Was this commission really meant for him, after what he had done? It couldn’t be. He didn’t deserve it. And so Peter, stripped of his discipleship by his own words, turns back to his old life, his old ways, from before the resurrection, before his travels with Jesus, before he had ever met the man. Peter announces, “I am going fishing.” 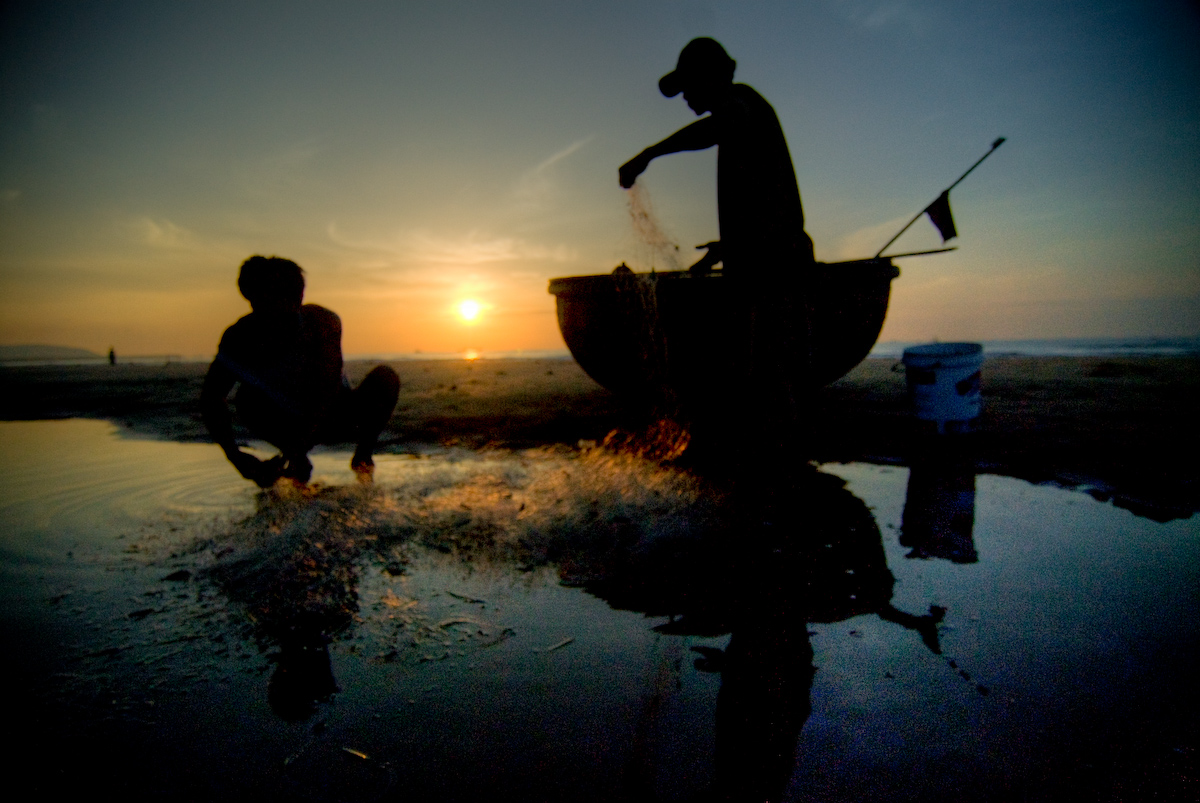 We go fishing too. I don’t mean we get into a boat like Peter did, and cast nets into the water and try to haul fish up out of the sea. Fishing is going back to what we know, what worked before, what feels familiar and comforting and easy, as though God weren’t doing a new thing right in front of us—a new thing that calls for a new way of life and a new direction. And the resurrection of Jesus was and is a new thing. It means in every death, in every ending, everywhere our lives are stuck, everywhere our relationships look irreparably broken, whenever we are tied up with guilt and regret at what we’ve done, God can make a new beginning. Going fishing like Peter means living as though we didn’t know this, when we darn well do know it.

We go fishing like Peter when we hide our fears and our vulnerabilities from those who care about us. We go fishing when we deny the power and the presence of God’s Spirit within us. A whole church community can be guilty of fishing, if it dwells on good things lost to the past, and fails to live with a present hope for the future God wants to create in us and through us.

And like Peter, when we try to escape the claim the resurrection places on us by going fishing, we come up empty handed. Honest effort fails to bring success. Hard work goes unrewarded. Peter and his friends fish all night, and they catch nothing. Not until Jesus shows up, and they listen to him, are they able to haul in a catch—and when they do, it’s a catch beyond their wildest imagining.

Then Peter finds himself at another charcoal fire, on the beach, across from Jesus. In John’s gospel, the little details matter—I think we’re meant to see this scene, at daybreak, as a mirror image of what happened in the dark night before Jesus was crucified. To answer Peter’s three denials, Jesus asks him three times, “Do you love me?” And Peter responds, “You know I love you.” Then Jesus says, “Feed my sheep.”

Feed your sheep, Lord? I can’t even feed myself. Look what a miserable fisherman I am after everything. I can only catch fish when you’re there, and when I … listen to what you say and do it. Oh…

Jesus’ call to Peter, “Feed my sheep,” comes only after Jesus has already offered him a sign of abundance, only after Jesus has fed him: “Come and have breakfast,” he says on the beach. Jesus does not ask us to minister to others on an empty stomach either. If you are feeling low in spirits and low in energy, if you feel as though the demands of your family or your neighbors or others pressing in on you with their needs are too great for you, you are right. They are too great for you. Jesus doesn’t ask us to serve others out of our own abundance, but out of his.

Sometimes, I’ve found, the best way to pray isn’t to use words, or even to listen for answers. Sometimes the best way to pray is to sit in silence for five, ten, twenty minutes, and just to offer that time to God: “Here I am, God. Let’s spend a few moments together.” God doesn’t require anything of you except to be yourself. You don’t have to manufacture lofty words or heroic courage or generous compassion for others. God supplies everything you need. Try it some time, and see for yourself.

Peter goes fishing to escape from his identity as a disciple. Jesus meets him, restoring their relationship and redirecting Peter’s energy toward feeding Jesus’ sheep, out of Jesus’ own abundance. But Jesus also wants to talk with Peter about following.

On the night of Jesus’ arrest, Peter had declared he would follow Jesus anywhere. Jesus said to him then, “you cannot follow me now; but you will follow afterward” (13:36). And now Jesus explains what following means. Following Jesus means not just feeding the sheep, but loving them with agapē, the Greek word for the love Jesus says God has for the world. “No one has greater love than this,” says Jesus, “to lay down one’s life for one’s friends” (15:3). Jesus makes clear today that answering his call will cost Peter his life. And yet still he says to Peter, “Follow me.” How could anyone ask something like this of us? How could we be asked to lay down our life, and to do it willingly and with love, unless we had already knew that death doesn’t have the last word, unless we could trust that when we lay down our life, God will raise us up? Jesus’ final call to Peter, the one that sets him on his way as a committed disciple once and for all, can only take place after Jesus’ resurrection.

Resurrection is personal. That’s the meaning of the scriptures we’ve been reading in this season after Easter. The resurrection of Jesus isn’t just about him. It’s about us too. The resurrection of Jesus touches every one of our lives in such a way that they can never be the same. Last week we saw this with Thomas, who got to touch and hold the risen body of Jesus as he had asked. This week we, along with Peter, see what it means to live as disciples of the risen Jesus. When we go astray, we are forgiven. When we feel empty, we are fed and given strength to nourish our neighbors. When we are afraid, Jesus himself is there, alive to encourage us with the power of resurrection. With our wounds bound up, our hungry spirits fed, and our fears calmed, may we trust in the one who calls to us as to Peter, “Follow me.”