Won’t You Be My Neighbor?

As a kid growing up in the 1980s, I learned some valuable lessons from a Presbyterian minister. Not the pastor of my church—well, him too. But I only got to see him on Sunday, and this other Presbyterian minister came into my home five days a week. “Mr. Rogers’ Neighborhood” answered the pressing questions that preschoolers everywhere were asking, like, “Will I go down the bathtub drain with the bath water?” But he was also there to reassure me about going to the hospital and undergoing surgery—something I had to deal with, unfortunately, as a young child.

I watched the documentary about Fred Rogers’ life and work that came out last year. If you haven’t seen it, you really should—he was just an incredibly special human being, and the world would be a much, much better place if more of us lived and loved the way he did. (Though I’m sure if he were here now, he’d tell us that we’re each worthy of being loved and valued exactly as we are.),

But in any case, there was a word he used a lot on his show and everywhere else, and it’s one that’s at the center of the gospel lesson we heard today. Mr. Rogers was an ordained Presbyterian minister. He’d been to seminary, he’d taken rigorous ordination exams, and he knew his Bible. So I suspect this story was on his mind when he wrote his show’s opening theme song, “Won’t You Be My Neighbor?” Asked about the meaning of that question, he said. “Well, I suppose it’s an invitation. It’s an invitation for somebody to be close to you.”1

You see, the lawyer who stands up to test Jesus was thinking in static terms. He was thinking that for each of us, there are some people who just are our neighbors, and other’s aren’t. There are some people we have a duty to love as ourselves, as the Law of Moses said, and there are other people we are not obliged to love as ourselves. And so his question, “Who is my neighbor?” is designed to suss out what Jesus thinks the rule is for deciding whether someone fits in one camp or the other.

And if Jesus had decided to answer this question in the way it was asked, there are any number of logical answers he could have given.

But if you’re thinking in those terms, then Mr. Rogers’ song doesn’t make any sense, does it? The question, “Won’t you be my neighbor?” is asking for a decision. It’s asking for someone to make up their mind, to make a choice to do something. And if the question of who your neighbor is is something to be settled based on where they live, or their nationality, or what family they belong to, then there’s no decision, no choice to be made. They’re simply in or they’re out, and this is just a given reality. 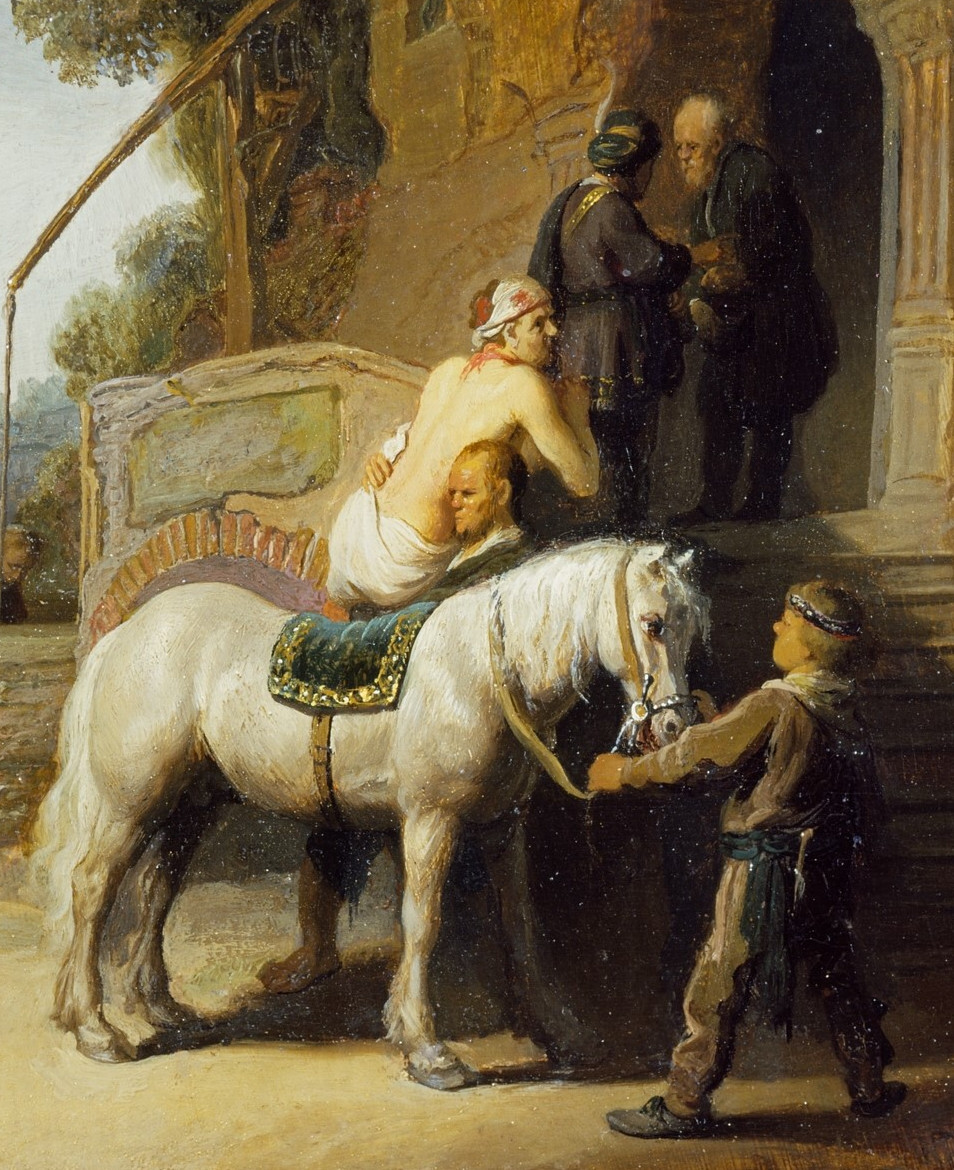 But Jesus doesn’t answer the lawyer’s question straightforwardly. He tells an incredible story of a mugging victim left for dead on the side of the road, and passed by not once but twice, by a priest and a Levite. The absolutely scandalous detail of the story was that Jesus made the hero a Samaritan. Let’s imagine for a moment that the Samaritan was the victim, rather than the hero. Jesus would have had a story about a broadminded Jew opening his heart to care for someone outside his usual circle of concern. That would be a challenging story—it would invite his listeners to push their own boundaries just a little wider—but it would not have been a scandalous story. Let’s not forget that Jesus’ teaching leads to him being put to death. Jesus wasn’t put to death for asking people to consider being a little nicer to outsiders. He was put to death because he said God was present and at work bringing the kingdom among the outsiders, and that the insiders couldn’t see it or take part in the new thing God was doing so long as they insisted on keeping their privileged position. And that’s exactly what he does here. He makes the Samaritan the hero of the story, the one who embodies the neighbor-love of the Law of Moses better than the Jewish religious leaders, who had their chance and chose to pass by on the other side of the road. Because the Samaritan didn’t stop to ask whether the man in need was socially and geographically situated so as to satisfy the requirements of being a neighbor. The Samaritan was moved with pity and followed his heart, and that was enough.

I wonder whether we appreciate the original radicalism of the parable. The way I was taught this story in Sunday school, and the way I think most of us still hear it, is essentially the same as the version where the Samaritan is the victim, not the hero. Be kind to others, give help to others, even if they’re not like you. That’s a good lesson, but it leaves out the power of Jesus’ message about the kingdom of God. The kingdom takes shape on the outside, and it moves from the outside in, not the other way around.

Gavin Rogers—who, so far as I know, is not related to Fred Rogers—is a Methodist pastor. He remembers going on mission trips to Honduras as a teenager after Hurricane Mitch devastated that country, and when he heard there was a large group of migrants from Honduras traveling through Mexico toward the U.S. border last November, he flew to Mexico City and joined them. “How many Christians go to poverty-stricken nations, tell people they love them and God loves them, but don’t help those same people when they show up in their backyard, Rogers ponders.”2 Plus, he had heard the different stories about the migrants that groups in the U.S. told about them for their own reasons. Rather than assuming he knew these migrants and what they needed or what ought to be done for or to them, rather than going with a political agenda, Gavin Rogers made a basic decision to be close to them, to become their neighbor.

And he experienced something striking: the migrant families, particularly the children, showed care and concern for him. They held onto the straps of Gavin Rogers’ backpack, so that he wouldn’t lose his balance as they rode together on a semi truck. And they looked for him to make sure he wasn’t left behind at every stop and change of vehicles. “They embraced me fully,” Rogers says. “[They] fed me when I didn’t have food, gave me water when I didn’t have water. And I’m an American just on this journey with them…they just saw if you are a stranger, if you are with them, you’re going to be treated like family.”3

This is the radicalism of Jesus’ parable. The kingdom and its lifegiving power aren’t with the priest or the Levite, but with the Samaritan, with the outsider, the stranger, the foreigner. As insiders, we have this idea that everything worth having is shut up on the inside, where we are, and it’s up to us to protect it. But look at our churches, our neighborhoods, our country… If we look at them with dismay at the aimlessness, cruelty, and decline we see, then what wouldn’t we give to have the common purpose, the kindness, the solidarity, the neighborliness that Gavin Rogers found among the Central American migrants? The kingdom and its blessings blossom on the outside—with the refugees and outcasts. The deeply challenging, even disturbing message of Jesus’ parable is not just that we should try to be kind to strangers—though we should do this. It is that, though we try in a million different ways to conceal this fact from others and ourselves, we are the one beaten and lying at the side of the road, and if we are going to have any chance of recovery, it will be due to the unwarranted kindness of those we’ve become accustomed to fear and despise.

What does it look like to make a decision to be a neighbor, to be close to those seeking refuge at our borders, or those immigrants already present in our communities? Our politicians can’t answer that question for us, because they’re acting out of the fear and resentment that all of us pump into our public life. If you’re distressed by what you see in the news, as I am, then you could do worse than to follow Gavin Rogers’ example. Make a decision to be close to those singled out for exclusion and mistreatment, or provide resources and support to those who stand with them. There are neighbors in our communities that are under threat right now, and they need a positive answer to the question, “Won’t you be my neighbor?”

Jesus himself, Gavin Rogers reminds us, was an immigrant. He came into our world from somewhere else, and we, the people of this world, rejected him, condemned him, and killed him. But in the face of all this, Jesus was willing to give himself, to lay down his life out of love in order to save us. The kingdom of God comes from the outside in, to those who are willing to give and receive grace with outsiders, to hear in the voice of enemies and strangers the voice of Jesus himself calling out, “Won’t you be my neighbor?”