Someone named “Jeff” wrote into an online forum looking for guidance in responding to a request from his wife’s casual acquaintance, who asked to stay in their small 2-bedroom apartment in New York City. He saw the request as rude, and would never dream of asking for such a favor. If he needed a place to stay, he might hint that he was going to be in town and see whether the other person picked up on the hint, and responded with an invitation.

Now there were a lot of opinions about what to do here, but one of the responses stands out as especially insightful. Andrea Donderi puts her finger on an experience so many of us have had—with our families, our acquaintances, our neighbors, especially those who may come from different countries with different cultures. She says this:

This [situation] is a classic case of Ask Culture meets Guess Culture.

In some families, you grow up with the expectation that it’s OK to ask for anything at all, but you gotta realize you might get no for an answer. This is Ask Culture.

In Guess Culture, you avoid putting a request into words unless you’re pretty sure the answer will be yes. Guess Culture depends on a tight net of shared expectations. A key skill is putting out delicate feelers. If you do this with enough subtlety, you won’t even have to make the request directly; you’ll get an offer. Even then, the offer may be genuine or pro forma; it takes yet more skill and delicacy to discern whether you should accept.

All kinds of problems spring up around the edges. If you’re a Guess Culture person – and you obviously are – then unwelcome requests from Ask Culture people seem presumptuous and out of line, and you’re likely to feel angry, uncomfortable, and manipulated.

So how about it, are you an Asker or a Guesser?

Jesus tells a story in today’s gospel lesson about an Asker. This is a story about someone who becomes unreasonable, uncivilized, and downright rude, but for a good reason. This person receives an unexpected guest in the middle of the night. In order to provide hospitality to this guest, he rushes over to his neighbor to ask for three loaves of bread. Now, we probably wouldn’t be faced with this situation. I know the Walgreens in Waldwick is open 24 hours, and so is the new Stop and Shop in Wyckoff. In a pinch I could probably whip up some food without troubling my neighbors. But in Palestinian Jewish villages in the first century, you didn’t have all-night supermarkets. You had grain, which had to be pounded into flour, which had to be mixed with leaven and water and maybe a little oil, kneaded, left to rise, and finally baked. That’s how you got bread, and it was a time-consuming process that took many hours. And there were no preservatives or refrigerators—bread didn’t keep, and so you baked just enough to meet your family’s short-term needs. You didn’t keep a lot of extra bread on hand just in case. To ask a neighbor for three loaves of bread was to ask for a lot.

But in real life, it was a request that probably would have been granted. Hospitality was an important value. Villagers had known each other their whole lives and were tied together with bonds of friendship and obligation. So if your neighbor asked for three loaves of bread, even though it was a lot to ask, you didn’t say no. You just don’t say no, even though it may make you uncomfortable. That’s why Jesus’ hearers would have been shocked when Jesus told them that the neighbor refused his friend’s request: “My house is all locked up, I’ve put the kids to bed, and I can’t do it.” This is a violation of all the unspoken rules that make the village work. Nevertheless, Jesus says, even though the neighbor refuses to get up because of the obligations of friendship, he will get up, and he will give his friend everything he needs, because his friend is willing to pound the door in rather than leave empty-handed. The Today’s New International Version translates this verse from the original Greek much better than our NRSV Bibles: “yet because of your shameless audacity he will surely get up and give you as much as you need.” 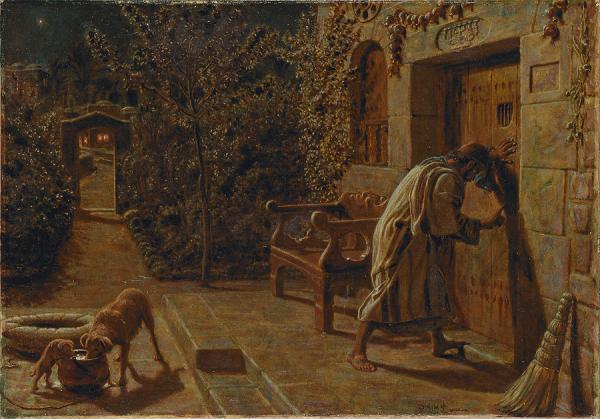 Not friendship, not relationship, but shameless persistence is receives an answer: “Ask, and it will be given you,” says Jesus. The Asker receives bread because he’s rude, because he won’t take no for an answer, because he’s willing to shout and pester his neighbor in the middle of the night. He probably woke up not just the people in the house he was pounding on, but the whole village! It’s appalling even to think about doing this, right? It sounds like something out of a sitcom. “Shameless” persistence makes us think of someone who habitually bursts into a neighbor’s home without knocking and pillages his refrigerator. You just don’t do that. What will people think of you?

But there’s more to the story. Yes, he’s exhibiting shameless audacity. But it’s not for the fun of shocking and embarrassing his neighbors. The guy waking up the neighborhood is doing this to provide care for someone who needs it. And it’s his willingness to look ridiculous, to offend, to be unreasonable in the interest of compassion and hospitality and justice that gets him what he needs.

Jesus wants us to learn to pray like this. Because prayer isn’t just a private conversation with God that has nothing to do with the rest of life. In the prayer Jesus teaches us, we see God involved in our basic needs (give us today our daily bread), in our relationships with others (forgive our sins as we forgive others), and in the course of our lives (do not bring us to the time of trial). And so prayer doesn’t end when we stop addressing words to God. Eating becomes a way of receiving God’s gifts and giving thanks. Showing generosity and forgiveness to others becomes a way of embracing God’s generosity and forgiveness extended to us. And the prayer of our lips—lead us not into temptation—is either confirmed or contradicted by our own actions and choices. We pray with our words, but also with our lives.

Jesus wants us to pray, to live, like the friend at midnight. He wants us to learn to put aside ego, reputation, and restraint. When the justice and compassion of God’s Kingdom require it, he wants us to be unreasonable, uncivilized, and downright rude—with God, and in our daily living.

This may sound like a strange way to relate to God. After all, God sees everything and knows us inside and out. When it comes to Askers vs. Guessers, shouldn’t God be the perfect friend of Guessers, knowing exactly what we need before we hint, before we intimate, before we even speak? But Jesus is telling us to be bold, to be outspoken, to be explicit, outrageous, and determined in pursuing God with our needs and wants. Jesus is telling us to approach God, not as a Guesser, but as an Asker, and a really obnoxious one at that!

But what if it’s about nurturing a particular kind of relationship—a relationship where, as Jesus teaches, we discover that God is a parent who never fails to provide good things to his children? What if it’s about becoming accustomed to the practice of naming our every want and desire and fear and sadness, and lifting it up consciously into the sight of God? What if Jesus is teaching us to be bold, to be tireless, to be shameless in prayer, not because God isn’t listening, or isn’t willing to respond, but because we are the ones who need to be reminded to come to God openly and honestly, time and again? What if the habit of shameless persistence in prayer changes the way we move through the world?

Because when I pray, particularly about injustice and heartache in the world—and there is a lot of it these days, isn’t there?—the question that keeps coming back to me is, “What if you are the answer to your own prayer?” I mean, if the friend at midnight had simply aimed a few choice words at God for bringing a guest to his door when he had no food, he would still have a hungry guest to feed, right? What if Jesus is asking us to be shamelessly persistent, not in meeting our own needs, but in answering the needs of the poor? What if he’s asking us to be uncivilized, unreasonable, and downright rude when the rules of civilization, reason, and manners all conspire to produce an unjust and uncompassionate outcome? I think of the Freedom Riders and others who disobeyed segregation laws and customs. I think of folks even today who have the courage to stand up for someone being beaten or abused by the authorities. Have you had moments when you saw something wrong unfolding, but you were afraid to say something because it might be rude or confrontational? Did you, could you, say a prayer? Or did you let it go? And what if we didn’t let these things go, either in prayer or real life?

So may you be shamelessly persistent in your prayers. May you hold back nothing of what you’re feeling from God, and may you experience the power of God’s presence that surges into the opening of authenticity. And may you be unreasonable in the face of all that stands against the justice and compassion of God’s Kingdom. Amen.