Do Not Be Afraid

Someone once told me that the most common commandment in the Bible is “do not be afraid.” (For what it’s worth, I ran a text search on my NRSV Bible and came up with 59 appearances of this phrase, stretching all the way from the Genesis to Revelation.) It seems like much of what God has to say to human beings consists of God telling us not to be afraid. In some cases, that’s because what God is doing is so new and unexpected that it causes us to fear. When the angel Gabriel appeared to Mary to tell her that she would become the mother of Jesus, he told her, “Do not be afraid” (Luke 1:30), because it was a wonderful but very frightening thing God was asking of her.

But sometimes God tells us not to be afraid because the situation we’re in looks hopeless. The Hebrew people lived through generations of brutal slavery in Egypt. Every chance for them to become free was cruelly snatched away. When Moses led them out into the desert, the Egyptian army caught up to them beside the sea, and it looked like this was the end of their short-lived freedom. In such a hopeless situation, God spoke directly to their fear, saying, “Do not be afraid, stand firm, and see the deliverance that the Lord will accomplish for you today” (Exodus 14:13). Sometimes God says, “Do not be afraid,” because our fear keeps us rooted in the world as it is, not open to the world God is creating. 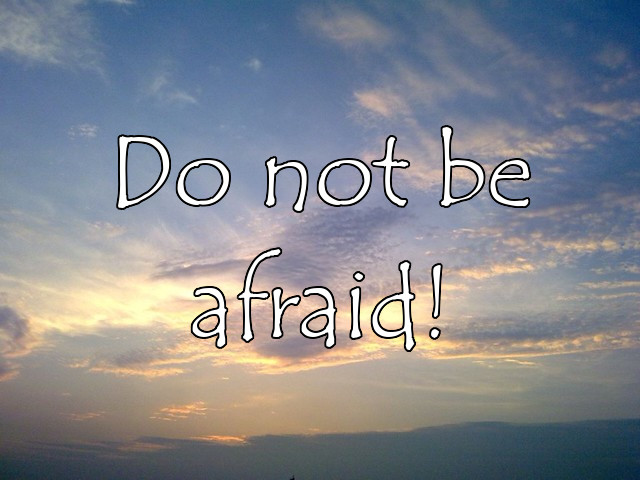 Our gospel passage this morning begins with Jesus speaking these words, “Do not be afraid.” He has been teaching the crowds about wealth and possessions and the dangers that they bring. Last week we heard the parable of the rich fool, where somebody who thinks he has enough wealth to rest and kick back for years to come finds out that his life itself is over. “Don’t be greedy for earthly riches,” Jesus is saying, “because they won’t protect you. They won’t keep you safe.”

This is another example of Jesus talking in ways that would lead him to fail a seminary pastoral care class. When you discover that someone is relying on an unreliable source of security, you’re not supposed to attack their defenses directly. What you’re supposed to do is to show them their real source of safety first. You’re supposed to give them a better defense mechanism before taking away what they already have, however shoddy it might be. But maybe Jesus is able to talk in this way because we’re not as fragile as we might think…

“Don’t rely on your possessions to keep you safe,” Jesus says. He points to the birds, who, under God’s care, never seem to lack for food. He points to the lilies of the field, whom God never fails to clothe beautifully. And he tells us not to be afraid, because for us God’s generosity goes even beyond the ordinary necessities God provides for living things. “It is your Father’s good pleasure,” Jesus says, “to give you the kingdom.” God wants for us freedom from guilt, freedom from illness, release from physical and spiritual suffering, a new beginning. God wants this new reality that Jesus came to announce, came to embody, to take root in our lives. Why? Not because we have earned it, not because we are strong enough or good enough or wealthy enough, but because it is God’s “good pleasure”—because God joyfully and lovingly chooses to be generous and gracious toward us.

Because of this, Jesus is able to tell us to rid ourselves of the things that can never bring security, in exchange for the everlasting security of God’s kingdom. Earthly purses wear out, earthly clothing gets eaten by moths, but investing ourselves and our gifts in God’s kingdom—in other words, letting God’s mercy make us merciful, God’s generosity make us generous, God’s reckless joy make us recklessly joyful—doing this buys treasure in heaven that can never be taken away. “Where your treasure is,” Jesus says, “there your heart will be also.” And then Jesus underscores this lesson with a story about household slaves preparing for the return of their master.

Where is our treasure? Do we spend our wealth on ourselves? Then we will be constantly worrying about ourselves. Do we put our time and treasure and energy behind the work God is doing in our world? Then we will be closer with God and with those who are near to God’s heart.

We’re looking for folks to sign up to come down to Paterson next month to work on a building a home with Habitat for Humanity. Some of you might know the story of Millard Fuller, the founder of that organization, and some might not, but it’s worth re-telling, because the passage we heard this morning loomed large for him during a crisis in his life. Fuller was a millionaire back in the 1970s, when that was an even more remarkable accomplishment than it is today. He founded a successful marketing company, owned a big home and a lake house, and a luxury car. When his accountant told him he was worth $1,000,000, he announced that his next goal was $10 million. But in accumulating all these things, Millard Fuller grew apart from his wife Linda. When she announced she was leaving, he had to do some thinking about what was important to him. When they reconciled, they decided to take Jesus’ command seriously. They sold their possessions, gave away their money, and began a life of service to others. The Fullers went on to found Habitat for Humanity, an organization that helps people into home ownership. Here is what Millard Fuller has to say about “treasure in heaven” in his book, The Theology of the Hammer:

Everything in this world is passing away. … The only truly safe investment one can make in this life is what is given away. That can never be taken from anyone. Everything else, eventually, will be taken by trickery, fraud, deception, bad management, poor investments, bankruptcy, ruinous divorce, theft, or death. You will be separated from your possessions, one way or the other! … True riches come from a life of service…1

This is the voice of someone who learned through hard experience the truth of what Jesus is saying: “Where your treasure is, there your heart will be also.”

This week, though, I want to come back to the words Jesus begins with: “Do not be afraid.” We’ve had a lot to be fearful and heartsick over lately, especially last weekend’s mass shootings, one of them motivated by the hateful, white supremacist motive of eliminating people of Hispanic heritage from the country. I can’t help but feel that the fire of violence is fed by politics and media that use fear to focus our attention, sell advertising, and win votes. Be afraid, these voices tell us, because your neighbors increasingly don’t look or speak like you. Be afraid, they tell us, because when people who are different gain opportunity, it comes at your expense. Be afraid, because the country—or we could say, “the church”!—you are leaving your children looks different than the one you inherited.

And I can’t help but see that every one of these fears has the same characteristics Jesus talks about in this passage about wealth. They all have to do with things that ultimately can’t be controlled, that aren’t up to us.

Maybe our role as Christians in fearful times is to try to embody the wisdom of Jesus: “do not be afraid.” Maybe it’s to put ourselves four-square behind the work of God in our world, facing changing neighborhoods and churches with openness and generosity, because where our treasure is—where we choose to invest our energy, our gifts and our worry—there our hearts will be also. Maybe it’s to question the upwelling of resentment or fear in ourselves as something that does not come from God, that in fact is a force trying to lead us away from God’s intention for us and the world.

The Brief Statement of Faith from our Book of Confessions puts it this way:

In a broken and fearful world,
the Spirit gives us courage
to pray without ceasing,
to witness among all peoples to Christ as Lord and Savior,
to unmask idolatries in Church and culture,
to hear the voices of peoples long silenced,
and to work with others for justice, freedom, and peace.

Do not be afraid! It is God’s intention to build the kingdom among us and in us. So in fearful times, let us continue to be God’s generous and faithful people! Amen.