The last 24 hours have been full of heartache and grief for our neighbors in El Paso, Texas, and Dayton, Ohio. This morning it’s appropriate for us to offer prayers for the victims of these shootings and their families. It’s fitting for us to give thanks for the first responders, who run toward the dangers everyone else wants to run away from. When the news provokes such sadness and fear, the advice of Fred Rogers to “look for the helpers” never goes astray. It’s good counsel for children, and it’s good counsel for adults too.

But we adults also bear a special responsibility to seek to be helpers. As we witness the violence erupt again and again in shopping malls, in schools, in nightclubs, in workplaces, it’s also appropriate to ask whether tears and prayers are enough for our neighbors who will be harmed by the future violence that will almost certainly result unless we change our ways. I wonder whether we as a church can act in such a way that people will be able to point to us when they look for the helpers. In a different part of Texas last month, at Westminster Presbyterian Church in Dallas, the Rev. Deanna Hollas was ordained as a minister of Gun Violence Prevention. Her ministry is intended to help churches across the country study gun violence and develop faithful responses to it in their own communities. I’m grateful for leaders like Deanna, and I hope the rest of us can hear and respond to the call to be helpers as well.

In this morning’s gospel lesson, Jesus is speaking specifically about wealth, but in a larger sense, he’s speaking about an inward focus. He’s speaking about a failure to connect our resources with the needs around us. I’ve included a painting by Rembrandt in our bulletins this morning—a depiction of the rich fool of the parable. Look at the statements of account that hem him in on one side and the other. There’s no room for anyone else in this life. It’s as though he’s already buried himself in a tomb of his own making. Jesus tells this story to contrast “those who store up treasures for themselves” on the one hand, with those who are “rich toward God” on the other hand. 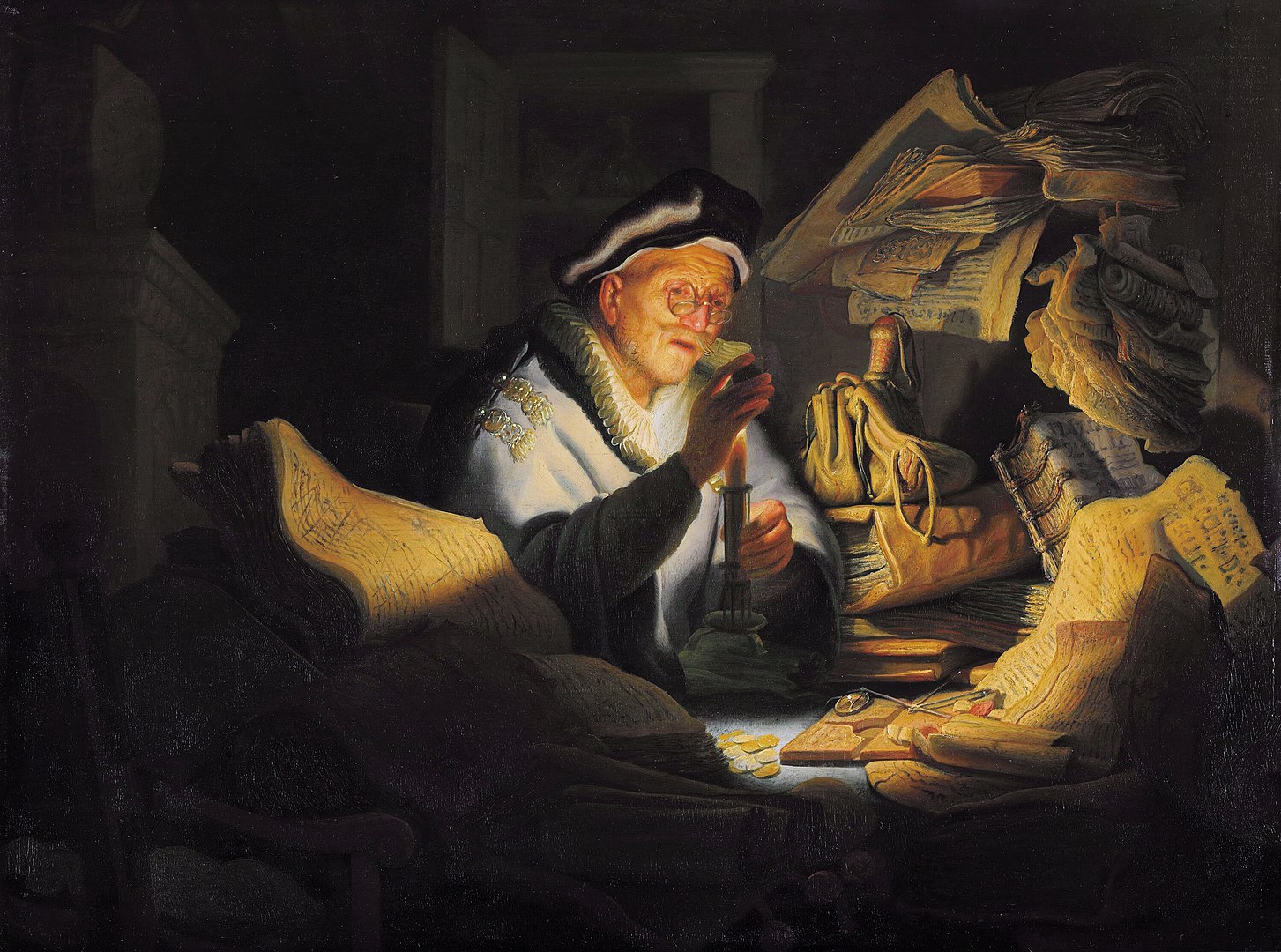 Rembrandt, The Parable of the Rich Fool. Oil on oak panel.

And this is a serious business, don’t get me wrong. But sometimes opening ourselves to the needs of others requires creativity and play. …

At my high school graduation, as I approached the rostrum to receive my diploma, the vice principal stopped me, just as he stopped every graduate, and asked to see my hands. They were empty, and that made him happy. “Go ahead,” he said. This was to thwart a prank that earlier graduating classes had pulled off to great success. They arranged for every member of the class to hand the principal a penny as they received their diploma. One or two pennies is no big deal–just put them in your pocket. But four hundred pennies, on the other hand, creates a serious problem! So I get it. You want to save the principal some discomfort and embarrassment at what should be an uplifting occasion for the school. But this particular way of solving the problem seemed to me to be… lacking in creativity and the spirit of playfulness in which the prank was first attempted. What if there were a jar for collecting the pennies? What if the principal announced, as he began to receive all this change, that he was going to donate the coins collected to the local food pantry, and if he challenged students to bring not just pennies, but quarters and paper bills? What if he were to hold the jar aloft halfway through the ceremony and say, “Oh come on, I bet we can do better than this!”? They way you respond when confronted with abundance, an embarrassment of riches, says a lot about who you are and what you value. What’s most important—maintaining order and control, or taking advantage of an opportunity to bend youthful exuberance to the service of a greater good?

So, Jesus tells a story about a man who found himself with an embarrassment of riches. Jesus tells this story, as he tells so many of his stories, in response to a question shouted out from the crowd. A man asks Jesus, as a rabbi with expert knowledge of Jewish law, to tell his brother to divide the inheritance with him. But Jesus won’t oblige him. Instead, he turns to the whole crowd with a stern warning: “Take care! Watch out!”

And in the final verse we heard this morning we hear the purpose of this story—Jesus shows us a story about a man who stores up treasures for himself, so that he can contrast this way of living with a different way, one that he describes as being “rich toward God.”

There’s one detail that jumped out at me as I read the story this time. When God interrupts the rich man’s soliloquy and says, “This very night your life is being demanded of you,” the word for “being demanded” is one that can be used to describe calling in a loan. The man thought his accounts were all in the black, but he had forgotten the biggest outstanding obligation of them all. Because his life itself is a loan from God, one that must be paid back—no exceptions. And when that loan comes due, what does the rest of it matter? No man is an island, wrote the English poet John Donne. No one exists entirely on their own, because we all receive our life and everything in it from God. The life that the rich man tried to construct for himself is an impossibility, even on its own terms, because his statements of account are incomplete when they fail to show what is owed to God.

So what does it look like to be “rich toward God”? Jesus doesn’t flesh this out here, in this parable, but I think we can sketch the outline of it. It means doing the opposite of what the rich man does. It means gratitude for God’s gifts, and for the increase that comes from them. It means paying back the interest on our life, as it were, by attending to the needs of the poor—the ones scripture tells us God takes special interest in.

A few years ago my family was vacationing in upstate New York early in the summer, and on Sunday we worshiped at a nearby Presbyterian church. During their sharing of joys and concerns, a member of the congregation stood up and asked us to join in giving thanks for the first fruits of the harvest. He was a farmer, and he had brought with him a basketful of new potatoes, from which he invited all of us to help ourselves freely, explaining that the fruits of the earth belong to God, who sends the rain and the sun to make them grow. He and his wife, he said, could think of no more fitting way to acknowledge the gifts they were beginning to receive than to share them with God’s people.

This to me smacks of being rich toward God. What are the blessings that have fallen into your life lately? What opportunities do you have to offer something up to the God whose ceaseless generosity makes it all possible?

We have received so much—not only the world we live in and its blessings, but the unconditional love of God shown to us through Jesus, who was willing to venture his entire life as a sacrifice to give us forgiveness and a new beginning. Jesus shows us himself what it is to be rich toward God. May you, gifted with such generous love, make your life a fitting return on such a great gift.