There’s a stretch of seacoast in northern Oregon that just takes my breath away. Ten to seventeen million years ago volcanoes exploded and lava flowed down the Columbia Gorge toward the ocean, and ever since the waves have been eating away at it, bit by bit, so that what remains is craggy headlands and dramatic, towering formations out in the sea. Evergreen forests spill down the lumbering coastal mountains toward the high-tide line, and the most adventurous trees have their boughs swept back by a process known as “wind pruning.” The dense forest is nourished by rain that doesn’t so much fall as drift in from the ocean in a dense fog. But when the clouds lift—as they often do in summer—then the view down the coast from the top of any of the headlands is simply glorious! The towering, ancient rocks and the sea, the sand and the forest have been in this place longer than humans have walked the earth, and when they’re bathed in sunlight, it’s a dazzling, breathtaking, awesome vision to behold.

Maybe you’ve got a place like this. If you do, if you can picture it in your mind and feel again the power and the beauty of the place, if you can remember what it’s like to feel no bigger than an ant on the face of the landscape, then you’ll have some sense of what the Israelites felt when they watched Moses go up the mountain. They saw a shining cloud envelop the mountain and Moses together. The scripture says that the “appearance of the glory of the Lord was like a devouring fire on the top of the mountain in the sight of the people…” Somehow Moses could stand it, but the people were terrified.

That’s hard for us to understand. I confess I often find myself thinking of God as a kind benign presence that constantly affirms, accepts, forgives. Maybe you do too. “To err is human, to forgive divine,” we say. God has to forgive me and accept me, because that’s God’s job. But when I see the awesome, wild power of those cliffs in Oregon, when I think about how small and insignificant I am next to them, and then when I think about how these cliffs are just the tiniest grain of sand in the universe that God formed out of the inky chaos, then I wonder whether I don’t make a big mistake when we take for granted that this awesome, untamed, mighty, sovereign God loves us. To those Israelites, God was many things—a powerful savior who rescued them from slavery, a faithful provider who fed them in the wilderness, a covenant partner who taught them a way of life. And so they lifted up their voices in the words of one of the psalms: “what are human beings that you are mindful of them, mortals that you care for them?” (Psalm 8:4). God was many things to them, but never just a buddy. So if the presence in our life that we call God fails to surprise us, astound us, awe us, and make us tremble in wonder, then maybe we need to ask whether we’ve glimpsed God or just an echo of our own personality. 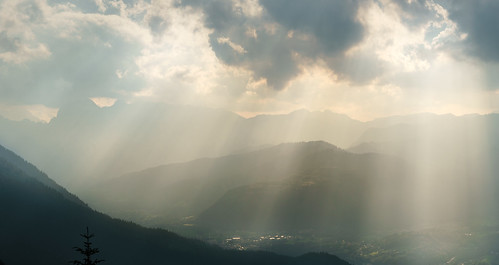 In the gospel lesson today, Jesus goes up the mountain. Jesus always takes these opportunities to get away. The mountain is a place where he can be alone, where he can pray and be reminded of who he is. He goes up the mountain, following in the footsteps of Moses, who went to meet with God and receive the stone tablets. He goes up in the footsteps of the prophet Elijah, who never died but was swooped up into heaven in a fiery chariot. Jesus goes up the mountain to be in the powerful presence of the living God. And it shows. The light and goodness and power that radiate from the heart of God shine through his face and even his clothing. Moses and Elijah are there, representing the Torah or “teaching,” and the Nevi’im, “prophets.”

Now, don’t you wonder how Peter, James, and John knew that these men were Moses and Elijah? After all, they’d never met them in real life. And it’s not as though they were wearing name tags. They were busy talking to Jesus, so they didn’t come over and introduce themselves. When Jesus talks to the three disciples afterward, the word he uses to describe what they experienced is “vision.” What they saw and heard and experienced wasn’t information that they pulled from the world around them through their senses—it was a gift that God gave them by opening their eyes and their minds. They came to see who Jesus really was—he’s the one the Teaching and the Prophets point toward, the one who carries God in his own person, who shines with the same light as God.

It must have been terrifying. Jesus, this man they thought they knew, was something much greater and wonderful than they’d imagined. The Greek text of this passage says he was metamorphosed, transformed, transfigured. He didn’t even look the same. Peter loses his senses and starts babbling about setting up a campsite, and that’s when the Presence of God envelops them, not with its full glory, but cloaked in a bright cloud. It’s still too much, and Peter and the other two fall flat on their faces.

But something happens. The voice doesn’t pronounce judgment on the confused and careless disciples. It says, “This is my beloved Son, with whom I am well pleased. Listen to him!” And what are the words that Jesus speaks next, right after God tells the disciples to listen? He moves over toward them, touches them, and tells them not to be afraid. He tells them not to be afraid in the presence of God. And when they look up, all they can see is their friend Jesus, no longer shining, but looking the same as he always has. Jesus is the one who carries God inside him with all its goodness and glory, but Jesus is also the one who gives this awesome power of God hands to touch us and a voice to comfort us. Jesus shines with God’s light, but he cloaks that light in vulnerability and weakness.

Jesus is glory clothed in weakness. He’s the eternal Word of God who becomes one of us. He’s the Messiah and Savior whose throne is a cross, who wins the battle by losing his life. We can go on and on with the awesome paradoxes, but we should also remember that as Jesus’ friends and disciples, as his body on earth, we share in his reality too. “We have this treasure in clay jars,” writes the apostle Paul (2 Corinthians 4:7). What this means is that our frailty, our struggles, our uncertainty, our vulnerability is the very place where Jesus’ glory resides.

I heard someone I admire once give his testimony about how he came to faith in Jesus. He was German, and though his family went to church twice a year, they only went at Christmas to celebrate the God-ordained structure of the family, and at Easter to celebrate the triumph of a victorious God for a victorious German Christian nation. (This is what it looks like, by the way, if we hold onto the Transfiguration without the cross and the empty tomb. This is why Jesus ordered the disciples not to talk about it until after the resurrection. It’s all too human to want to be in the presence of power and glory without the vulnerability and sacrifices that love requires of us!) So in that sense, this man didn’t really know God as a child. It was only when he was a teenager during the Second World War that he discovered God’s power and grace. He was recruited into the army at age 17, and during an air raid in Hamburg, he saw his friend killed next to him, and he cried out to God for the first time, “God, where are you?” Deployed to Belgium, he deserted the army and surrendered to the first group of Allied soldiers he could find. In the POW camp he was given a New Testament to read, and he came across the words of Jesus on the cross: “My God, my God, why have you forsaken me?” In that moment, he said to himself, “Here is someone who understands me.”1 He followed up on his testimony by saying, “If it weren’t for Jesus Christ, I don’t think I could believe in God. I believe in God only for Jesus’ sake.” Without Jesus, God is a remote and unknowable and fearful power. Jesus is the bridge that connects our human fragility and vulnerability with God’s transforming power.

That hidden, loving power is here too, you know. When you look at this community, what do you see, what do you recognize? A human organization, a nonprofit corporation with bylaws, officers, and books? A group of good friends who like to worship at the same time, in the same way? Look closer. Look with the eyes of faith that God gave to the three disciples on the mountain, that God gives you. This is the body of Christ. His church is where God’s glorious, transforming power lives today, hidden behind all these familiar faces. These flawed, vulnerable people around you have the power to pray for you, to touch you with God’s own blessing, to forgive you, to feed and clothe and provide for you, to tell you not to be afraid when you stand in the holy presence of God with wonder and awe. God’s glorious, transforming power is here, now, and sometimes, when we’re especially vulnerable and in need, God gives us the eyes to see it.

So may you know the transforming, reshaping, glorious and holy power of the God who created you and who loves you. May you understand that when you are in the presence of Jesus, when you are part of his Body here, you are enfolded in goodness and light. And may you feel his touch and hear his Word to you: “Get up, live as a child of God, and do not be afraid!” Amen.