Can I confess something, right off the bat? I picked today’s scripture from Genesis, because I didn’t want to preach about the gospel lesson from Mark. In that passage, the Pharisees ask Jesus what he thinks about the law of Moses and what it says about divorce.

A couple of weeks ago, I was talking about this passage from Mark with some clergy friends, and all of a sudden one of them interrupted, saying, “You guys are talking about this passage about divorce academically. You don’t know anything about what it is to live through it.” And then he opened up to us about his own story, with all its heartbreak, followed by healing, forgiveness, and new beginnings for everyone involved. I’m not going to tell his story for him, but I was humbled by his testimony, and by the way he could claim the words of Jesus both as a judgment of his mistakes and as grace freeing him and healing the wounds those mistakes caused. Some of you can speak about divorce with this kind of authority, having lived through it, but I can’t. I know that the passage from Mark, if not interpreted with due care and sensitivity can compound hurt and judgment. And right now we are in a season of history where people are especially raw, and so it’s just very easy to hurt each other with careless words.

But as I prayed about today’s sermon I felt God leading me instead back to this passage from Genesis, which Jesus quotes in his answer to the Pharisees. I decided to follow Jesus back to the beginning. And what I found there was a landscape so rich and wide with grace that I felt I needed to explore it with you. This text reminds us that we are made for companionship, made to be helpful to one another, and to stand with one another. It reminds us that God honors our own choice, our own sense of who is a fitting helper and partner. It shows God’s blessing not just on marriages, but on the vast array of life-giving human relationships.

So let’s first remember where this passage comes from. This is the book of Genesis, which means birth or beginning. This is part of the creation narrative, a rich tradition of stories told and retold for generations among the Hebrew people, before they finally set it down on paper. God has taken dirt (or “adamah” in Hebrew) from the ground and shaped it into a human being. Our translation refers to this human being as “the man,” but that’s not quite right. The Hebrew word for an adult male is “ish,” but in our passage, this person is called “the adam,” not the proper name Adam, but “the adam,” the earth-being, the one formed from dirt.

God looks at the adam, and says, “It is not good for the adam to be alone.” It is not… good, God says. Something is lacking. And God goes on to say, “I will make him a helper as his partner.”

“I will make him a helper as his partner.” Our modern translation is better, because there are two important Hebrew words in that verse. One has to do with help, with assistance, with being useful and beneficial. But the other word has to do with being an equal, a peer. 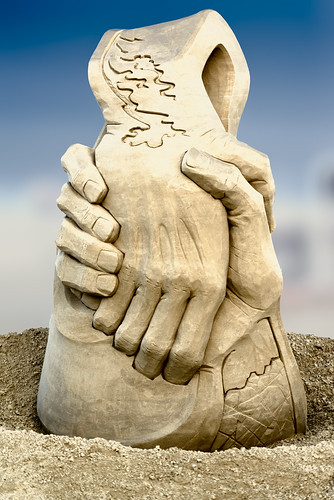 “It is not good for the adam to be alone. I will make him a helper as his partner.” Because this passage ends with some commentary about marriage, about the relationship between spouses, some people have read this to say that God wants all people to be partnered in this way. But that can’t be right…. As Christians, we’re meant to be led by Jesus’ example, and so far as we know Jesus never married. Jesus wasn’t married, but he wasn’t alone either. We know about the Twelve, his inner circle of disciples, with whom he shared wisdom apart from the crowds, and whom he wanted close to him when he was in distress and needed to pray. In the gospel of John, we hear about a particular disciple, never named, whom Jesus especially loved, who leaned up against him at the Last Supper. And we hear that Jesus loved his close friends, Mary, Martha, and Lazarus of Bethany. All of these, in their own way, were helpmeets for Jesus. They attended to one another’s needs. They supported each other. They journeyed together. And they didn’t have to be married to be companions, to be partners and helpers. So I don’t think this passage has to be just about marriage. It extends to all the ways human beings love one another and are present with each other.

Now, sometimes it is good to be alone. I love my kids very much, but I did welcome the silence of the empty house once they returned to full-time school this fall! Sometimes Jesus withdrew to a quiet place by himself, and he taught us to do the same. Each of us needs the space to be with God by ourselves, and to be the person God created us to be. So sometimes it is good to be alone.

But it is not good always to soldier on alone through this life, is it? And we’re not alone. We have the family we’re born into, and the family we choose for ourselves as we grow. God says, “I will make … a helper for [a] partner.” All of these relationships are God’s gift.

Notice, though, that God says, “I will make,” not “I will choose,” not “I will impose.” Just look at this story—look at the process of trial and error. God creates all of the animals, bringing them one by one to the adam, who names them. “What do you want to call this one?” God asks. And the adam says, “I think we’ll call it a wildebeest.” “What about it?” asks God. “Do you take this ‘wildebeest,’ as you call it, to be your life partner, to have and to hold?” “No, I don’t think so,” says the adam. “What else you got?”

Some people want to take this passage and turn it into a weapon to use against members of the LGBTQ community. “Adam and Eve, not Adam and Steve!” they shout. But when they do this, they skip over the most important part of the story. God does not immediately hit on the perfect partner for the adam. And just consider, in this passage, who is the one who gets to decide when the search is over? Who is the one who gets to decide when a suitable partner has been found? It’s not God. “This at last,” says the adam, “is bone of my bone and flesh of my flesh!” This helpmeet, this partner, is made by God, but not chosen by God. God draws back and leaves us the space to decide. And as people made in God’s image, we are also meant to honor the choice, the consent, the heart of others around us. God didn’t impose a partner on the adam. We’re not meant to impose ourselves on anyone else. When two hearts cry out to each other in mutual recognition, “Bone of my bone and flesh of my flesh,” God is delighted, God is pleased, God sees that it is good. And as an illustration, as an example—not in any way to exclude other kinds of relationship—our text ends with a reminder that two people choosing one another can form a bond that is so strong that they are able to become “one flesh,” even superceding the bonds between parent and child. Jesus adds a commandment to this: “What God has joined, let no one separate.”

I said that it’s a difficult season of life right now. A lot of people are struggling financially, struggling with mental or physical health, struggling against persistent injustice. What a blessing, what a good thing, that God gives us one another to be companions, to be neighbors—to use Jesus’ word—to one another. The Peace and Global Witness Offering we’re receiving today is one way that we stand as helpers to neighbors around the world. But there are ways you can bring peace into your own relationships, into your neighborhood, into your school or your workplace. It doesn’t have to be hard or complex. Who is hurting, who is present to you in need today? How can you show them that they are not alone?

We are made to be helpful to one another. We are made to stand beside and for one another. God gives us partners, helpmeets—not only romantic and marriage partners, but other companions as well—but in a way that makes space for us to choose. Let no one separate the bonds God has helped us discover and join. Amen.