When I was a small kid, the Bui family moved in next door to us. They had a son close to my age who used to pal around with me and my brother. His father was from Vietnam, and his grandmother, Mrs. Bui, came to stay with them for long periods of time. She spoke hardly a word of English, but she was a deeply caring woman. If we forgot to bring in our bikes, she would wheel them up to the garage. When my mother was working in the garden and put my baby sister down next to her, Mrs. Bui would scoop her up—we found out later that in her hometown you didn’t let small children play on the ground, because of poisonous snakes.

But what I most remember is that if I were playing with her grandson next door, she would interrupt us to bring us snacks. Sometimes it was just cookies from the pantry, but often she would set down eggrolls or other home-cooked food, saying, “A special treat for you.” I think about Mrs. Bui now that I’m an adult, and I’m so grateful to her. She was probably one of the more attentive and compassionate people in our neighborhood. She cared about her grandson and his friends, and though she couldn’t always communicate with us through language, she could say what she wanted to say with food.

There is something special about food that transcends language, that expresses care and hospitality and acceptance in a way that anyone can understand. As babies, we bond with our parents through touch, but also through feeding, and we come to trust the people that are there to satisfy one of our most basic needs. And when we get older, it’s amazing to see how just sharing a meal together with someone opens up conversation and connection in a way that other kinds of interaction can’t. It’s built into our very language—a “companion” literally means someone with whom you break and share bread.

So it’s no surprise that food plays a big part of the Bible’s story about God’s relationship with us. In the book of Isaiah, when God wants to describe what it is going to look like when God answers the people’s prayers and rescues them from the enemies that threaten them, God shows them the image of a banquet: “a feast of rich food, a feast of well-aged wines, of rich food filled with marrow, of well-aged wines strained clear” (Isaiah 25:6). When the psalms describe what it means for God to be in relationship with God’s creation as the Creator, the psalmist sings, “These all look to you to give them their food in due season; when you give to them, they gather it up; when you open your hand, they are filled with good things” (104:27-28). And the psalm that’s most familiar to us, Psalm 23, talks about green pastures and a table prepared for us. God feeds, which is to say, God provides, sustains life, and blesses it with abundance.

The people who come to Jesus in our gospel reading have not experienced abundance. We heard last week that Jesus looked over them and saw that they were like sheep without a shepherd. Now, that’s a way of saying that these people are badly led, that those in authority—King Herod, and the Roman emperor—are not serving them well. But it’s more specific than that. A shepherd protects the people from their enemies. And a shepherd feeds the people. Yet here is this massive crowd full of men, women, and children bearing all these burdens in their bodies and spirits. And whatever their long-term needs might be, there’s a pressing immediate need—they are in a deserted place, and they are hungry.

“Where are we going to buy bread for all these people?” Jesus asks Philip. We know he’s testing him, because the scripture says so, but also because of how he frames the question. “Where are we going to buy bread?” It’s a question that assumes bread must be bought. It takes the social and economic and political arrangements as given, and asks, how can we use these to provide for the people’s needs? And given that framing, Philip is completely right in his answer: “We can’t do it, Lord! There is too much need, and we don’t have the resources to meet it.” The kingdom of this world is unequal to the task of feeding its people. Jesus is going to have to show them a completely new way.

The food Jesus gives them is not supernatural in origin. He doesn’t turn stones into bread, nor do flakes of manna appear on the ground as they did during the exodus. Andrew identifies a little kid who has brought a bit of food. Five loaves and two fish is more than the kid needs, but Andrew is still thinking in this-worldly terms when he asks Jesus, “What are they among so many people?” What are they, indeed? Jesus is about to show us.

In John’s version of the story, Jesus gives thanks. The other gospels tell us that Jesus “blessed” the bread, but here he gives thanks. The Greek word John uses for this is from the same root as “eucharist,” and so as Jesus offers thanksgiving and breaks the bread, we’re meant to imagine this as a Communion celebration. John doesn’t show us Communion at the Last Supper. Instead, he shows us Communion here, at the Feeding of the Five Thousand. This isn’t just some random miracle Jesus does to show his power. This is Jesus performing a sign that shows us who he is: I am the bread of life, we’ll hear him say next week. He came so that we might have life and have it abundantly. He gives his body for the life of the world. What is happening here is Jesus acting out these deep truths about his identity and purpose. 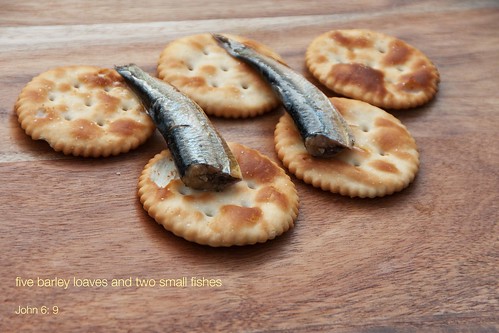 What are five loaves and two fish among so many? It turns out that they are more than enough to feed the crowd, with twelve baskets of leftovers. When we place the little that we have in the hands of Jesus, when we allow him to break and share it with others in love and thanksgiving, he multiplies it beyond all imagining. Who is Jesus? He is the shepherd who feeds the sheep, who provides everything they need and more, who blesses the flock with abundance.

The passages we’re going to read over the next few weeks do a lot of unpacking of what this story means. But I think today it’s important just to dwell in the wonder and necessity of feeding as a sign of God’s kingdom.

In ordinary times, we’ve done a lot of feeding at this church. I hope circumstances will soon allow us to return to having fellowship with food after worship. Over the years we have helped to feed homeless families through the Family Promise shelter with the other Allendale churches. We have an ongoing relationship with the Center for Food Action, and the donations we provide go to the tables of our neighbors in this part of Bergen County, so that their families will have enough to eat. We don’t do this just because it’s a nice thing to do, or because we want to be generous. We do it because of what’s happening in the story we heard today. We do it because in the hands of Jesus, the little bit that we have to share overflows in blessing for us and for others.

In your personal walk as a disciple, don’t underestimate the power of feeding. Mrs. Bui didn’t need words to convince us kids that she cared deeply about us and welcomed us into her family’s home. If there’s someone in your neighborhood or on the edge of your circle of friends that you’re thinking about, someone who maybe carries a lot of burdens, it may be that the best way to share God’s love with them is to feed them.

Because the real meaning of this story is that you are enough. Thinking like Philip, trying to measure up our resources and our abilities against the vast sea of human need around us, can be overwhelming. But Jesus doesn’t ask us to offer what we don’t have. He asks us to offer what we do have. He gives thanks to God for what we are able to provide, however small and insignificant it may appear in our own eyes. And in his hands it becomes abundance, blessing, sustenance for multitudes.

Who is this Jesus? He gathers our loaves and fishes, our stretched resources, our too-busy lives, our inadequacy, our insufficiency, our lack and blesses, breaks, shares, and feeds those hungry for bread and good news. In his hands, it is enough—we are enough, and more than enough. Thanks be to God! Amen.