One of our family traditions when I was growing up was to go on a New Year’s Day hike. We’d get up early in the morning, when all the world was still asleep, and it felt like we were the first to stake a claim on the new year. On one cold but sunny January 1, we headed into the Blue Ridge mountains to the west. The trail took us to the top of Mt. Bleak, which is a terrible name for such a beautiful place. Everything was quiet, still, and clear. The lookout faced east, and you could see almost all the way back to Washington, DC. The sun was inching higher into the sky, rising up over the first hours of the new year, and it was as though we had been given a glimpse of something no one else got to see. 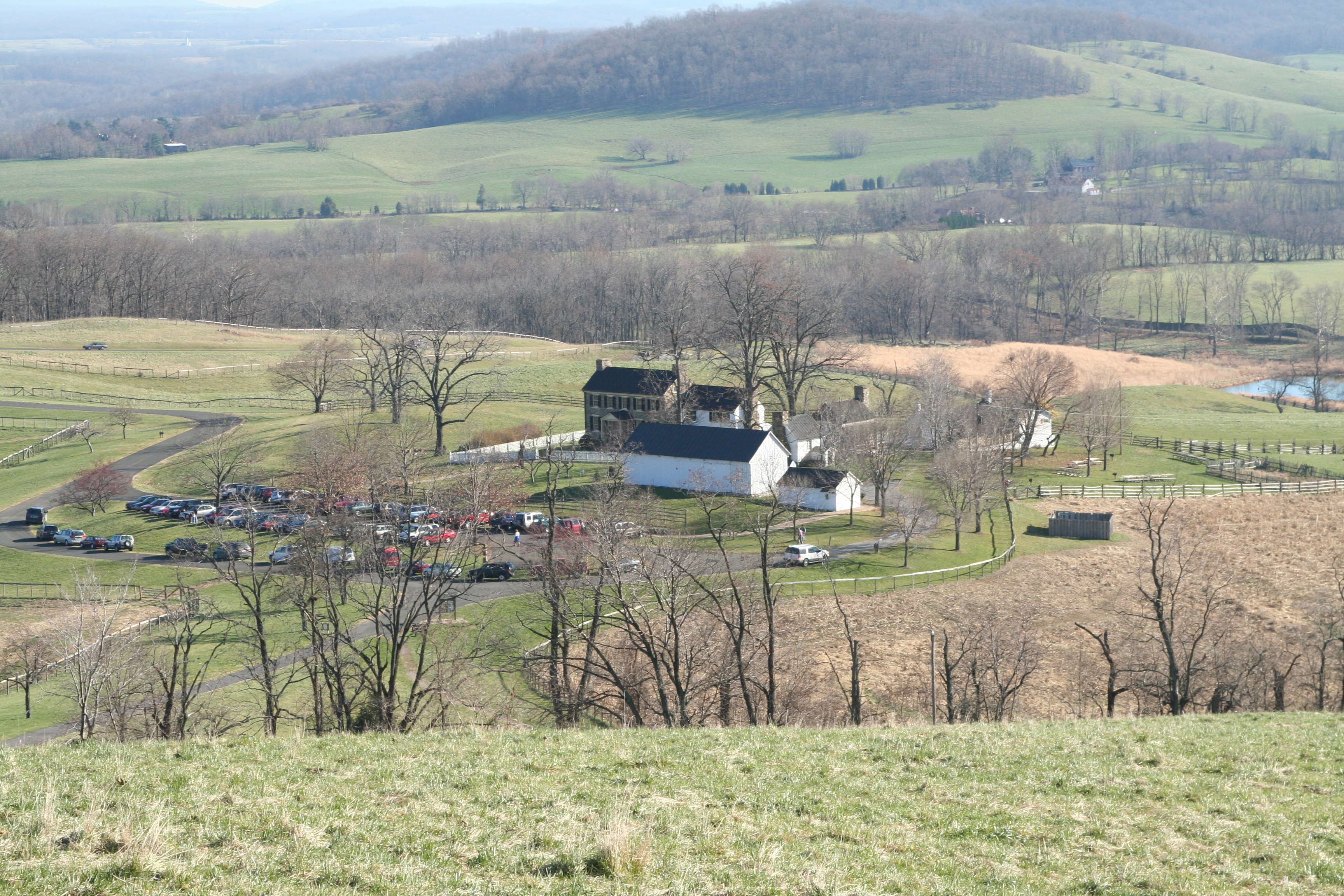 View from the trail to Mt. Bleak. Photo by David Baer. Some rights reserved (CC-BY-4.0).

There is something special about mountains, even little ones like we have in New Jersey or Virginia, where I grew up. When you go up a mountain, you take a step closer to heaven, and you’re set apart just for a little while from the day-to-day. Going to the mountaintop is an elevating experience.

Maybe that’s why we use it as a metaphor to talk about a powerful, even lifechanging experience. In college I was part of a campus ministry that helped me hear a call to ministry, and there was something special about being part of a community of other people who were all asking the same kinds of questions and struggling with the same things—God, school, career, love, adulthood. I am better off in so many ways because I spent that season of my life on that particular mountaintop.

From time to time we get to climb up to the mountaintop. There are friendships or communities or workplaces where we feel not just nourished but uplifted. To be in such a place, to enjoy such a season in your life is good, and so I completely understand what moved Peter to say what he said. Jesus had taken him and James and John up the mountain, and Jesus changed, and all of a sudden he was speaking with Moses and Elijah. It was all so wonderful and fantastic and Peter didn’t want it to come to an end. So I get why he asked Jesus if he could make tents so that they could stay there. Because a mountaintop experience is uplifting. It’s good. And so you don’t want it to come to an end.

Did you ask yourself how Peter knew that this was Moses and Elijah Jesus was talking to? They weren’t exactly wearing nametags, were they? And they don’t come up and introduce themselves to the disciples. These are things Peter and his friends can’t know with their senses and reason, and so we’re meant to understand that it’s a vision, a revelation. God is giving the disciples spiritual eyes to understand things they couldn’t figure out on their own. Because a mountaintop experience isn’t just thrilling for the sake of being thrilling. Skiing down the side of a mountain is thrilling, but unless there’s something going on besides the rush of wind and the pull of gravity and the thumping of your heart, it’s not a mountaintop experience—it’s just fun, which is good, don’t get me wrong! But a mountaintop experience is not only thrilling. It’s meant to reveal something new about what God is doing. It’s a gift of insight that grabs hold of you and won’t let go.

Moses and Elijah were the great prophets of old. In their own way, they had each been part of God’s work of salvation, and their appearance here means that God is about to accomplish something big—God is about to judge and save God’s people. And the story tells us that Moses and Elijah and Jesus are talking about Jesus’ “departure”—the Greek word in the gospel is ἔξοδος (exodus), a word that echoes the name of the story of the Israelites’ liberation from slavery in Egypt. And this departure is going to happen in Jerusalem. Peter, James, and John have been given a gift. They’ve been given a glimpse of God’s plan: God is working in Jesus, making him an instrument of deliverance. Because a journey to the mountaintop not only lifts us up. It also helps us see what God is doing.

It is only a glimpse, though, isn’t it? Though Peter tries hard to hold onto the vision, a cloud comes over them and takes it away. In its place comes a voice that confirms what they’ve just been allowed to see and hear and know: “This is my Son, my chosen. Listen to him!” The vision leads back to Jesus. The brief moment of seeing and understanding gives way to a time of listening and trusting and following. Because this mountaintop experience, like all the others, comes to an end. The certainty that comes with having a message from God pushed directly into your senses and understanding fades into memory, and from that moment you can hold the gift you’ve been given only through faith.

Jesus’ road leads down the mountain, right back into the reality of a hurting and imperfect people. The first person he encounters is a man with a sick child. The other disciples–the ones left behind—have tried with all their might to heal him, but they’ve failed. Needy people, hapless disciples, a boy held captive and beaten by an unclean spirit. Holding onto the vision, once you’ve come down the mountain, means hard work and disappointment. So it’s no surprise that Jesus cries out in frustration, even as he heals the boy. The mountaintop is preparation for the hard work of pursuing God’s vision down below. That’s not always uplifting, and sometimes you wonder whether you’re doing any good at all.

After Mother Teresa’s death, those who had been closest to her related how she had experienced God’s presence, and enjoyed a rich and comforting spiritual life, but only until she followed God’s call to her to serve the poor of Calcutta. “[S]he enjoyed vivid experiences of God’s love and immediate presence in 1946, when she was called to enter the slums,” writes Richard Ostling, and yet during her ministry, when she worked so sacrificially and compassionately with the poor, she wrote such things in her journal as this: “Heaven from every side is closed.”1 That mountaintop ecstasy she had known as a young woman had to sustain her the rest of her days. And as her life was being examined by Roman Catholic officials looking into whether to recognize her as a saint, I think they were right in seeing this, not as a point against her, but as evidence of just how strong her faith was. Mother Teresa was able to carry on the way she did because she believed in the good, powerful, compassionate God she met on the mountaintop, and she followed the vision God’s had given her, even in those later times when God seemed to be absent.

Faith isn’t about what happens on the mountaintop. Faith begins when you come down the mountain, away from the reassuring immediacy of clear sight and certainty. Faith brought Jesus back to an earth teeming with needy people, and it steeled him for a journey that led to betrayal, the cross, and the tomb. He tried to warn his friends, but the meaning of his words was concealed from them. So they were left with faith—trust in Jesus, listen to him, follow him.

A mountaintop experience isn’t something you can manufacture. You can’t make it happen. When it does come, it comes as a gift. If God is very real and present to you right now, in this season of your life, then maybe it’s because you’re being prepared for a hard but necessary journey to come. If that season lies in the past, and life feels like a slog right now, then maybe it’s because you’ve received the glimpse you needed to set out on your way, and right now you’re simply meant to press on in faith.

Walking with Jesus down the mountain, the road ahead is unknown. You don’t know where you’ll be tomorrow, next week, or next year. The road us unknown, but we’ve glimpsed where it leads. The resurrection of Jesus is a glimpse of everything faded, broken, and rejected about us and our world being put back together, alive again. Step by step, listening to him, following him, we’re being led to the future we’ve only glimpsed, that we can only grasp in the here and now by faith. And that captivating vision of life transformed and redeemed gives us courage and hope in the face of our own brokenness, in the face of disappointments, threats, and death itself. Listening Jesus, trusting Jesus, following Jesus, we’ll get there at last. Amen.