Is This the Best You’ve Got?

It was the summer before my junior year of high school. My parents had been pushing me to get out and have a little adventure, and so I took a trans-Atlantic flight by myself to stay with a family in Germany for four weeks. Germany had not been my first choice. It wasn’t even my second choice. I was studying French in school, but the exchange agency found me a placement in Germany, and I went anyway. My host brother Christian was a cycling fanatic, and while I was staying with him he took off on any number of expeditions. As far as Christian was concerned, the closer to vertical the road inclined, the better the ride! So I would trail after him, huffing and wheezing on his older sister’s cast-off girl’s bike as we summited some rise that may as well have been the Matterhorn. The wonder and the danger of being a 16 year-old boy is that because you’re still trying to figure out who you are, and because you haven’t run up against very many hard, cruel limits, you can imagine yourself succeeding at almost anything you try.

When Christian got wind of a bike exposition coming to his small city in southwest Germany, he could barely contain his excitement. The show was set to open with a preview day for press only, and so Christian and his friend Wilko concocted a scheme to get us into the exhibit hall without paying admission. We would present ourselves as reporters for our high school newspapers. (Because again, when you’re 16, you can’t imagine how these things could turn out badly!) But somehow it worked, and so with a press pass dangling from my neck I found myself staring at a whole lot of cycling gear I couldn’t begin to understand. 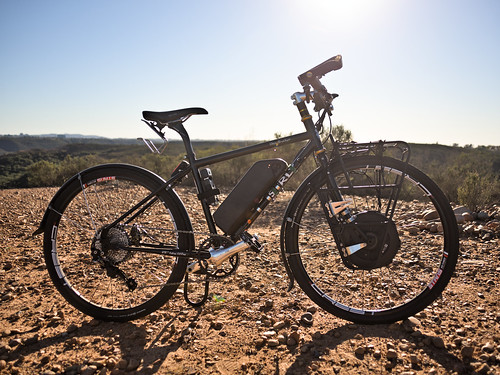 Now, there was a company conducting a promotional event for their mountain bikes on a dirt track, and Christian thought it would be fun to enter. After the company official had barked a series of instructions at us, of which I understood not a word, the race kicked off, and I discovered something about the bike I had been given to ride. When you’re climbing a hill on a mountain bike, you want the bike to keep moving, however slowly, and so you can expect that when you’re in low gear you’re going to pedal furiously just to make the back wheel turn ever so slightly. I’d imagine that if you’re a skilled cyclist this would be a very helpful feature. But if you are not a skilled cyclist, as I most definitely was not, then you find yourself riding a bike that has essentially two gears: one gear that locks the pedal so that it is completely impossible to move as you begin to go up a rise, and another gear that lets the pedal go, so that your foot slips, and you lurch forward and plant your face right into the dirt. As it turned out, I made extensive use of both of these gears, in front of an audience of cycling enthusiasts and trade journalists. I finally finished the race, about three minutes after the rider immediately in front of me, by using my feet to wheel the bike around the track like Fred Flintstone in his stone-age car. Yabba-dabba-doo. I think it was pretty clear to everyone there that I was not a cyclist or an expert of any kind. It was the best performance I could muster, and it was far from good enough.

Sometimes the best we’ve got isn’t good enough. You start out with the best of intentions—there was a part of me that really believed I could keep up with the other riders. It wasn’t until the race began that my eyes were opened, and I realized that I couldn’t be what I was trying to be. Has this ever happened to you? Have your best intentions brought you into a situation where you were embarrassed or worse? Have you ever found you couldn’t live up to others’ expectations… or even your own?

In today’s gospel passage, Jesus speaks a lament over Jerusalem. One thing we’ve got to understand is that Jesus, his disciples, and the crowds that came to listen to him were all faithful first-century Jews, and for them Jerusalem represented all the best that they had. The city was central in their scriptures, which are our scriptures as well—the capital city of Judea, conquered by the great King David himself. In recent years, King Herod the Great—not the Herod mentioned in today’s lesson, but his father—restored the Temple, building it up in an even more grand fashion than when it had stood in the days of Solomon. The city of Jerusalem was the political and religious center of Jewish life, and faithful Jews from Galilee and around the world would make pilgrimages to it.

So it was reasonable to expect that the people who lived there would be good and decent, and that the city’s leaders would be wise and discerning. If you had asked any one of Jesus’ followers, they would have told you that this magnificent city was the best their people had to offer. And so as we hear Jesus’ words, I want us to call to mind the things that are most dear to us, the things we take pride in, and set our store by. What are those things for you? What Jesus has to say is about Jerusalem, but it isn’t just about Jerusalem. It’s about the best we’ve got. It’s about how our best isn’t as good as we think, but also about how God loves us and comes to our flawed selves to redeem our best-but-not-very-good into something greater.

Some Pharisees come to Jesus. They come to warn him that Herod wants to kill him, and if he knows what’s good for him he’d better skedaddle out of Herod’s territory. Now, they may be doing this out of the goodness of their heart. They may be working for Herod, who is fresh from executing another prophet, John the Baptist, and who wants to see if it will be enough simply to scare Jesus away. Or they may be freelancing, jealous of Jesus’ appeal and eager to stop the flow of their own flocks to Jesus’ movement. But whatever their motives, Jesus isn’t having any of it. You go back and tell that fox,1 he says, that I’m going to do the healing work I came here to do. And then I’ll be on my way, Jesus says, not because I’m afraid of Herod, but because Jerusalem, not Galilee, is where prophets are killed.

“Jerusalem, Jerusalem, the city that kills the prophets and stones those who are sent to it!” Jerusalem has God’s Temple. It is the place where God’s chosen line of kings ruled God’s people. But it is also the place where God’s messengers are ignored, marginalized, and executed. The leaders of Jerusalem threw the prophet Jeremiah down a well, because he kept telling them the truth that God intended for their city to fall to the Babylonians. There is much for Jerusalem to be proud of, but there is also, especially among its leaders, arrogance and an unwillingness to listen to God’s voice, even when it’s for their own good. As Jesus says: “How often have I desired to gather your children together as a hen gathers her brood under her wings, and you were not willing!”

Jerusalem is supposed to be the best stuff God’s people have to offer. And it is! Looking at the whole story, though, it turns out that the best stuff human beings have is not very good at all. But in spite of this darker side, Jesus has set his face toward Jerusalem. It’s his destination, and the place where he will show his great love, the place of new life and resurrection, and the birthplace of the church. “And I tell you,” Jesus says, “you will not see me until the time comes when you say, ‘Blessed is the one who comes in the name of the Lord.’” … pointing forward to Palm Sunday and everything in the week that follows. Jesus isn’t scared of Herod, and he isn’t scared to put himself in the most dangerous place imaginable for a prophet to be. Jesus goes to Jerusalem not just to be killed, but to bless Jerusalem, to bless our brokenness that calls itself good with his words from the cross: “Father, forgive them; for they do not know what they are doing.”

Look, I’ve learned some things since I was sixteen, and I know enough now not to enter any dirt-bike races. But I wonder whether I, whether all of us, don’t fall on our faces all the time—maybe not publicly, maybe in front of a crowd of people, but in front of an audience of One, the only audience who really, ultimately matters. When we try to renew our spiritual lives, sometimes it can come from a place of judgment and self-righteousness. When we try to show care and compassion for others, sometimes it can come from our need for approval and recognition. Our best stuff so often comes wrapped in hidden agendas and motives that we ourselves don’t realize. And that’s why Jesus laments over Jerusalem. It is a fitting thing in Lent to examine ourselves, to see that the things we call good may in fact not be so very good as they seem to us. The old Christian mystics called this “dying to sin”—recognizing how far short we fall with even our best stuff.

But remember that Jesus doesn’t just lament over Jerusalem. Jesus goes there. He goes there to be rejected and crucified by the best leaders, the best institutions humanity has to offer. But in his story, when our best has done its worst to him, when Jesus’ best, most loyal friend deserts him, when the soldiers of the greatest empire on earth strip and humiliate him, when he gives up his spirit and they put him in the tomb, God raises him up. And because of this, we have reason to hope that Jesus is there where we, unknowing, unmindful, fall short with our best stuff. He’s there, pleading, blessing, calling down God’s forgiveness for us, until we set aside our best stuff, dying to everything we used to call good, and give our own spirits into the hands of the God who raises the dead to new life. Amen.