We Had to Celebrate and Rejoice...

The religious people have a beef with Jesus. The upstanding leaders of the community grumble that he spends his time with “tax collectors and sinners.” Jesus is visiting your neighbor down the street, the one who leaves his garbage cans at the curb and lets his kids run riot. He’s having lunch with that neighborhood mom who made eyes at your husband. He’s giving his time and attention to the despised and outcast, the folks who are just trouble, who no one knows how to get along with. So the respectable folks—the ones who come to church every Sunday, the PTA presidents, the pastors, the members of the library association—they start to grumble and complain. Why are you wasting your time with them, Jesus? They had their shot and they blew it.

So he tells them a story. It’s a family story. Everybody’s got a family, and everybody’s family, let’s face it, has got story. Everybody’s family has stories about who said or did what to whom, and why these two won’t speak to each other, and whether you should choose a side or just stay out of it. In the Disney animated film Encanto, Pepa Madrigal sings, “We don’t talk about Bruno,” before belting out a long complaint about how her brother wrecked her wedding. And everybody laughs, because we can relate. Families have been like this for as long as there have been families. Jesus’ parable is about what happens to a certain family when mercy and forgiveness become part of the story. The stray, the outsider, the sinner becomes the focus, and the loyal, the insider, the faithful have a choice to make.

I’d like to look at the parable through the eyes of the three characters. Let’s begin with the younger son…

I was a young man, old enough to make my way in the world. One day I got the urge to get up and go. Maybe some of you know what this feels like—the need for adventure and new possibilities. Maybe you’ve gone backpacking, hitchhiking, wandering from place to place just to see where you could go. Some of us just itch and chafe at the confines of their ordinary life, don’t we? I felt limited and held back. I don’t blame my father. After all, he agreed to let me go in the end. But life on the farm was just the same story day in and day out. I had to get up and move. One day, when I had worked up my courage, I asked for my share of the property, and I took it and hit the road.

I went to “a far country,” as one of your versions of the story phrases it. Maybe you find that surprising. Wasn’t freedom and financial independence enough? Couldn’t I taken my share and started my own farm, with my own hired hands, running it the way I wanted? Listen, how many of you have ever sworn that you’d never become your father or mother? (How did that work out for you, by the way?) See, it wasn’t enough for me be on my own. This new life has to be a total rejection of what I had before. Otherwise even without the bars, it would have been just the same prison cell. You can see that this plan was doomed from the start, can’t you?

So off I went into the far country. Your stories are kind to me. They capture my first days there in two words: “riotous living.” I made new friends and threw lavish parties for them. I gambled recklessly and lost big. I drank to excess. I patronized prostitutes. This newfound freedom was overwhelming, and I got caught up in a life that was exciting but purposeless, wasteful, and unhealthy. And it drained me dry.

Then came the famine. Or “recession” as you might call it. I was out of money. I went without food for days. I didn’t know what to do. Finally, a ray of hope… one of the citizens there was willing to take me on as a swineherd. Yes, yes, I know… a swineherd. What a disgusting job, especially for someone of my heritage. I was raised to see pigs as unclean, filthy animals, and here I was touching them, feeding them, rounding them up. Not only that—I was so hungry that I would have taken their food, if I could have gotten away with it. But even though I was working in a degrading, detestable job, I never thought to go home. Until that day when I finally came to myself.

What used to feel like a limited, boxed-in life now felt safe and solid. Even the servants in my father’s household are treated better than this, I thought. And so I hatched a plan. I would drag my hungry, dirty, exhausted carcass back home and throw myself on my father’s mercy. When my father released me, the obligations of both father and son were ended. I no longer had the right to be cared for as a son—I gave that up by my own choice. So I would ask to be taken in as a servant. What I got instead was an astounding surprise.

I’m not a brash or forceful man. I run my farm the best I can. I make sure my workers have everything they need. Myself, I don’t need much. We’ve always had a simple home, me and my sons. They’ve never known hunger or danger. We had a tranquil life.

That’s why I was stunned when the younger boy comes to me and says, “Please, let me have my share of the farm now.” Such arrangements aren’t unheard of. I’ve had neighbors who divided up their property between their sons even before they died. But it felt like a rejection. It felt as though he was saying, “Hurry up and die already!” There was no malice on his face, though—just impatience and nervous excitement. And that’s when I knew. I might be able to keep his body here, but his soul was restless. One way or the other, he was going to leave, to strike out on his own. The only piece I could control was this—how would he remember his father? As the tyrant who thwarted him to the end, or the parent who loved him enough to let him try it his own way? It was the hardest thing I’ve ever done, but I gave him what was due to him. He was gone a few days later.

It was as though he had died. I got no letters, no communication from him. I didn’t know whether he was healthy or ill, prosperous or poor. Days gave way to weeks and months. What was worse, all of this changed my older son. With his brother gone, he became obsequious and servile: “Yes, father,” “It is as you say, father,” “I will do it, father.” I caught him venting his resentment to the servants, telling them that now he alone was left to help his poor father, and what a travesty this was. As if I had no choice, no say in the matter! I don’t appreciate being treated as though I’m helpless or weak. If I want to be generous, I’ll be generous. If I want to let my son go free, I’ll let him go free. 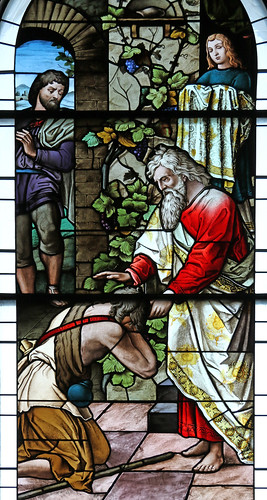 One day I was out in the field, and I caught sight of a traveler. This guy set off all my alarms at first… He was poor, from the sight of him, dirty, and desperate. My first thought was: sheep-rustler. I grabbed my staff and started toward him. But he didn’t run. He just looked at me, with these sad, piercing eyes. And then I knew it was him. I knew it was my son. I ran to him, hugged him and kissed him. He started to say something—some kind of apology, I think. But I was too happy even to let him finish—I shouted for the servants to throw the biggest banquet we’d ever had. Who cares about the property, who cares about what he said or did? The boy I’d given up for dead was alive, and I had him back for good.

Now if only I could say the same for his brother…

I’ve never told a lie. I’ve never stolen. I’ve never approached another man’s wife. And I’ve always honored and obeyed my father. When he sent me out to work the fields for five hours, I made it seven. When he asked me to draw ten gallons of water, I made it twenty. All I ask is a little consideration for my loyalty.

I could have told you my brother was going to run away. But I never guessed my father would have given him his share of the inheritance first. Well, he must have done something to pull on the old man’s heart-strings. Still, it was an opportunity for me. With all the extra work to be done, I could show my father just how loyal, just how willing to please him I was.

Then the ingrate came back. He crawled back home, stinking of pigs and filth. And my father threw him a party. He slaughtered the choice calf and called for music and dancing. It was the greatest, most lavish party he’d ever given… and it was all for this screw-up, this… I don’t even want to call him a brother—he’s no brother of mine.

I was out in the fields when that son of his came back, and I stayed outside the house, just tossing my spade into the ground, over and over again. My father came out to persuade me to come in, but I refused. You see, this isn’t the way it’s supposed to work. Good deeds, not bad, should be rewarded. Loyalty, not running away. Obedience, not riotous living. Where was my reward? Where was the recognition for my staying on the farm where I belonged? Nothing… just a party for the son who strayed and came back.

The question, friends, is where you find yourself in this family drama. For the sinners, for those who found themselves on the outs, Jesus gives them a place at the table as the prodigal, the son who came back, the ones whose return needs to be honored and celebrated. For the Pharisees and scribes, who want honor and recognition for their cautious observance of the Torah, it’s too much. But of course their grumbling only means that they’re missing out on the party.

I don’t always find myself identifying with one or the other. Reading the story this time, I’m more drawn to the father. Mercy, grace, forgiveness is a choice. It’s his choice. It’s not fair. It’s decidedly unfair. But that’s where Jesus, where God, takes a stand. And it’s not weakness, it’s not affability, it’s not a tolerance for bad behavior that puts them there, but an absolute joy at seeing a lost sheep return. And I wonder whether we sometimes don’t get so caught up in our own notions of fairness that we miss out on what God is trying to do. I’ll leave it to you to find your place in the story, but the thought I want to leave you with this morning is this: the sovereign God of grace is throwing a party for those who know they’re on the outside, who have no other claim, who drag themselves back expecting to live in the servants quarters. And the loyal brother is stuck outside, trapped by his own sense of righteous indignation. Do you want to be in that party? Do you want to? And what act of forgiveness or self-humbling will it take you to get there?