Everybody loves a parade! A few years back, the Allendale Holiday Observers, a civic group in town, was celebrating their 100th anniversary, and they held a parade. They invited all the organizations in town to march with them, and so a few of us from church signed up to be in the procession through town. And I remember we thought a lot about what we were going to do to identify ourselves and send a message on behalf of the church. What do you say to neighbors who might be Christian or Jewish or Hindu or Muslim or none-of-the-above? “Come join us” sounded good, but we tried to think bigger. What message did we want people to hear, Christian or not, potential churchgoer or not? What does the good news that we as followers of Jesus are here to share sound like in three words on a banner? We went with “God is love.” And the parade was a lot of fun! We met a lot of people, and we represented our faith and the church well. Everybody loves a parade, but in the end it does matter why you’re there, and how you show up.

Have you been in a parade? Why were you there? Was it to represent a Boy Scout or Girl Scout troop? A sports team? Were you part of a marching band making music for the crowd, or part of the local fire and rescue squad? Maybe you were in a veteran’s group? Was it a Memorial Day parade, with the somber purpose of remembering the fallen? Was it a Fourth of July Parade celebrating our nation and all the richness of its civic life? Every parade has a purpose, and everyone in it has their own purpose for being there.

There were actually two parades into Jerusalem before the Passover Jesus celebrated there. The scripture tells us directly about one of them–and we’ll get to that in a minute. This Palm Sunday procession came in from Bethany and the Mount of Olives to the east of the city. But we know from the scriptures that there was also another procession that came in from the west, even if they don’t describe it for us. How do I know there was another procession? Because the scriptures tell us that later that week, Pontius Pilate, the Roman prefect of Judea, was in the governor’s palace, where he sat in judgment of Jesus. Pilate didn’t live in Jerusalem full-time. He lived in Caesarea, a city on the coast, where he could administer the province and stay in close contact with his superiors back in Rome. But at Passover he marched up from the sea with a detachment of soldiers, who would have come into Jerusalem from the west, carrying the Roman eagle and Roman banners, stepping along in formation, and armed to the teeth. Pilate would have ridden at the head of the column on a warhorse. This would have been quite a sight, quite a parade—and maybe some people showed up and cheered them, but that wasn’t why they did it.

A few weeks ago, our gospel reading had some people coming to Jesus to tell him about “the Galileans whose blood Pilate had mingled with their sacrifices” (Luke 13:1) at an earlier Passover. Passover was a dangerous time. It was the time when the city swelled with faithful Jews from all over the world, coming to remember the story of God breaking the power of Pharaoh and leading the Israelites to become their own nation in their own land. And so the last thing Pilate wanted was for anyone to get the idea that God might just liberate the Jewish people again. The Roman soldiers came looking for any trouble, and if any trouble reared its head, they were prepared to put it down ruthlessly and brutally. But if you can march into the city in force, all businesslike, in full view of any would-be rebels, then maybe you won’t have to. The procession of Roman soldiers represented the threat of violence that could be brought to bear against any freedom-minded Jews. 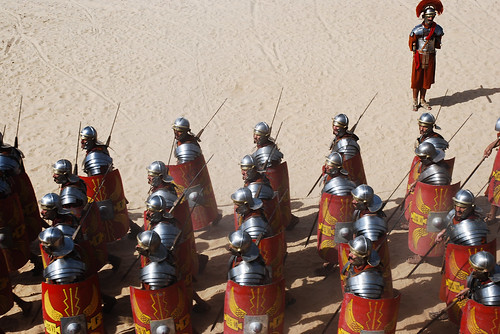 But the scripture doesn’t show us this procession, as impressive as it might have been. Instead, we see something that can only be described as a parody of the Roman procession. Jesus is riding not a warhorse, but a colt that has never before been ridden, a young horse, which we can imagine might have staggered under the weight. He doesn’t even have a proper saddle–he’s sitting on top of his friends’ coats. The large company of disciples—not just the Twelve, but Jesus’ bigger following—starts singing Psalm 118, which is a victory song for a conquering king. The ragtag band of farmers and fishermen is celebrating Jesus the way singers would celebrate a military hero. They are praising God for the “deeds of power” they had seen, not military victories, but Jesus’ victories over illness, death, and unclean spirits that troubled people; his miracles of healing and feeding multitudes. Roman power dominates, but the power of Jesus, the power of God’s Kingdom, liberates people, setting them free for abundant life. Some of the Pharisees in the crowd—that is, Pharisees who were followers of Jesus, who were part of the movement, who were sympathetic to him—start to freak out, because they are savvy, intelligent people who know Pilate doesn’t have a sense of humor about this kind of thing. “Jesus,” they plead, “let’s tone it down a bit! This is going to bring all the wrong kind of attention to us.” But Jesus waves off their objections. What’s happening here is so right, so necessary, so joyous, that if you shut these people up, he says, the stones themselves will cry out!

Every parade has a purpose, and everybody in it has a purpose of their own. Which parade do we want to show up for? Which parade has the greater power to change us, change our communities, change the world? Jesus’ parade is different. It looks a little ridiculous, especially to those who are worldly wise. But it’s here that God is marching, singing, dancing a new thing into being.

Marching in Jesus’ parade means giving up on domination and control, even in our personal lives. It means not holding on to past wrongs, as a way of holding power over someone else. It means a readiness to forgive—not to make ourselves unsafe with someone who’s likely to hurt us again, but to let hurts of the past go. Jesus’ power is a power that liberates—and forgiveness liberates the forgiver as well as the forgiven person.

Marching in Jesus’ parade means setting aside the benefits that come to us not because we deserve them, but because we’re part of systems that exclude some people and privilege others. A friend of mine, who happens to be white, told me a story about visiting a hospital and seeing a person of color sitting on a gurney neglected in the hallway, and apparently in a lot of pain. It seemed like she was seeing the racial disparities in medical care that are documented in so many studies playing out right in front of her eyes. So she spoke to this person and listened, she said something to the staff at the nurses station, and she also followed up later with a phone call to a hospital administrator. “People in charge listen to people like me,” she explained. “So I need to use my voice for people who aren’t listened to.” That’s power that lifts up, that liberates. That’s the power of Jesus.

Marching in Jesus’ parade means joy as well, though. Because the purpose of Jesus’ power—the power that frees us from sin, from disease, from death, from alienation from God and one another—is a power that frees us for love, for community with God and our siblings on earth. In the end, trying to bind, control, and dominate ourselves or others is a fearful, joyless life. I can imagine a lot that might have motivated the Roman soldiers to be there—their pay, the promise of land or citizenship when they retired—but I can’t imagine, for the life of me, that they felt joy when they marched into the city. I can easily imagine, though, that they felt dread and resentment. Contrast that with the parade on the other side of town with its ecstatic singing. Marching with Jesus means not everybody is necessarily in step or singing in the same key. But it’s lively, it’s light, and it’s joyful. Which parade do you want to be in?

So these are some ways that we can show up and march in Jesus’ parade. But it’s also important, as we enter into Holy Week, to remember that even the people who showed up with Jesus wavered. You can see it begin right here, in today’s gospel, with the Pharisees who are his friends. Because you see, they secretly fear that the power of Pilate is really stronger than the power of Jesus. Not too loud, Jesus, they say. Let’s keep the joy, and especially the freedom-talk, to a minimum. They say this because they don’t believe, in their heart of hearts, that God’s power can win.

Every week it seems there’s more heartbreaking news from Ukraine, another report about an attack from Russian forces on a hospital or an apartment building, more people suffering, millions of people streaming to safety in other countries. The powers that look to dominate and control others are still with us today—they didn’t die with Pilate or the Roman Caesars. And because of the devastation and harm they cause, it’s easy for us to believe, like those friendly Pharisees, that these powers will always run the world. Maybe you can carve out a space to do some good here and there, we think, but it’s the strong ones who always win.

The good news of Palm Sunday is that Jesus refuses to quiet the joy of those who hope for something more. Jesus leads us in procession to confront the powers that wait for him and us, not to fight them in their way, but to let them do their worst. And in the end, we will get to see whether God’s liberating power can’t reach down into the depths of the grave itself and raise us up into victory, into freedom, into joy.

Blessed is the king who comes in the name of the Lord! Peace in heaven, and glory in the highest heaven!