Sometimes it’s good news when someone isn’t where they’re supposed to be.

The film Good Will Hunting tells the story of a kid from South Boston, a mathematical genius played by Matt Damon whose childhood trauma boils over into violent behavior that gets him in trouble with the law. Will develops a relationship with a therapist, who tries to help him think about what matters and what kind of life he wants to lead. One day when Will and his best friend Chuckie are relaxing after a day of work on a construction site, Chuckie shares his hope for his friend. His greatest hope, Chuckie says, is not finding Will where he’s supposed to be. “You know what the best part of my day is?” he asks. “It’s for about 10 seconds from when I pull up to the curb to when I get to your door. Because I think maybe I’ll get up there and I’ll knock on the door and you won’t be there.”1

Sometimes it’s good news when someone isn’t where they’re supposed to be. The news this Easter morning is that Jesus isn’t where he’s supposed to be. Easter morning brings astonishment and surprise. It’s baffling to the disciple community, because they don’t yet know where he is. In our gospel today, nobody meets Jesus in the garden. He’s not standing behind the women who came to the tomb. There’s only an empty grave and two angels with an astounding message. All we know from the story we heard this morning is that Jesus is not where he’s supposed to be—in the tomb, lifeless, cold. He’s not here. 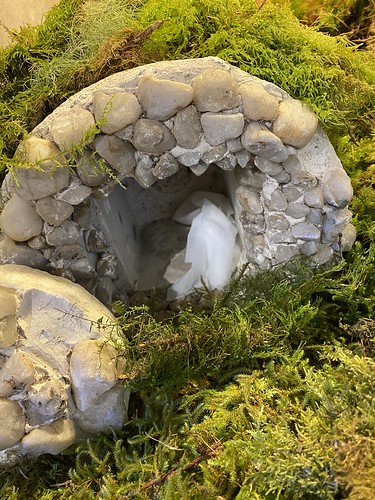 You won’t find Arunima Sinha where she’s supposed to be. Arunima was a 24-year-old up-and-coming volleyball player, hoping to represent her country in international competition, when she was thrown from a moving train. She lost her left leg and spent four months in the hospital, where she was told she would never play volleyball again.2 Where would you expect to find a person who suffered such a painful and devastating injury that dashed their dreams? You might expect such a person to be doing really well if they were able to grieve what they lost, and to accept a new future that was a cut-out of the future they had hoped for before, something smaller. You’d hope, to find that person leading a quiet life somewhere.

You might expect that, but in this case you’d be wrong. If you go looking for Arunima Sinha, you’d best start at the very top—the top of the world’s highest mountains, that is. As she recovered from her injuries, Arunima set a goal of becoming the first woman amputee to scale Mount Everest. After that, she set about reaching the summit of the highest peaks on each of the seven continents, an achievement she finally accomplished in 2019, when she climbed Mount Vinson in Antarctica.3 She’s become a speaker and author, and wants to set up a sports institute to help other differently able athletes.

This is an amazing story. I don’t know what well of interior strength this exceptional woman draws from, and I’m not going to try to speculate about where she gets her drive. I don’t tell her story because I want to inspire you to greatness, or somehow diminish other people who have a life-altering injury or disability and don’t go on to climb mountains. It’s absolutely OK to lead an ordinary life, whether you are differently able like Arunima, or whether your physical abilities are more typical.

Instead, I want to focus on how folks like us react to a story like hers. We feel surprise… bafflement… delight. It confounds our expectations. It’s a remarkable story precisely because it is so unlike what we have come to understand to be the usual way of things. And if we can sit with that sense of astonishment this morning, I think we’ll be in the right frame of mind to receive the message of Easter. Because it can be delightful, joyful good news when somebody isn’t where they are supposed to be.

Mary Magdalene, Joanna the wife of Chuza, Mary the mother of James, and a few nameless other women got up early on the first day of the week. They had prepared embalming spices, and they set out for the tomb to anoint Jesus’ body. This was to be an intimate moment of grief, as they tenderly cared for the body of their friend and said their goodbyes. And their devotion to Jesus after his death speaks volumes about them. The male disciples were still in hiding, having denied Jesus in his moment of need and fled from the crucifixion. Their fear had paralyzed them. Not so the women. They were accustomed to the hard realities of life. They cared for one another through the messiness and considerable danger of childbirth. They provided for the needs of their families. They tended the sick. And they anointed the bodies of the dead. This was what they did. They gritted their teeth and pushed on through the inevitable tragedies that attended the life of women in first century Palestine. Life was hard, but these women were familiar with grief and resignation. This was how dreams ended. This was the way of things. And so they went looking for Jesus where he was supposed to be. They went looking for Jesus among the dead.

Now, our lives are not as hard as the lives of those women. But their resignation in the face of sadness and loss isn’t so strange to us. We lose someone or something important to us—a loved one, a job, a home, our health, our dreams, our hope for the person we meant to be once—and we grieve and get on with living as best we can. We know the path the women followed to the tomb that morning. In the course of our lives, we walk it many times.

And we don’t do this just as individuals, either. There’s a cynicism that’s all too present in our civic life, where politics has become a blood sport rather than a search for the public good. There’s a despair about the progress of racial equality, where some folks simply don’t want to talk about the struggles and the triumphs, the whole story, the bad and the good, past and present, if it’s going to make us uncomfortable. But how else is anything ever going to change?

Jesus said he came so that we might have life, and have it abundantly. But when we settle for a lesser kind of life, whether in our own lives or as Christians taking part in our political and cultural institutions, we too walk the way to the tomb with those women. We go looking for Jesus among the dead.

Jesus, in his life, in his ministry, very rarely stayed where he was supposed to be. Lepers lived outside the boundaries of cities and towns, away from everyone they might pollute with their illness. But Jesus touched and healed them. Women were not supposed to approach important men, and it was scandal to have anything to do with them, but Jesus spoke with women and accepted their touch. Jesus gleefully cast aside traditions of purity and propriety when it meant a chance to liberate someone from illness or demonstrate God’s mercy. Wherever Jesus showed up, blind people regained their sight. People sorry for the choices they’d made found a new beginning. The dead returned to life and to their loved ones. Wherever Jesus showed up, things were not the way they were supposed to be. Wherever Jesus showed up, there was freedom, forgiveness, and new life.

When the authorities in Jerusalem handed Jesus over to the Romans, when the Roman soldiers nailed him to a cross and executed him between two criminals, when they pierced his side and sealed his broken body in a tomb, it was just the natural order reasserting itself. That was life. That’s what happened to anyone who said just a little too loudly and a little too boldly that God wanted something more for the world than what Rome, what the Empire and its collaborators could offer. Up on the cross, tortured and humiliated, that’s where someone like Jesus belonged. If you believed in Rome and its glory, you thought this was a good thing. If you didn’t, then it was something to mourn. But either way, the cross, and then the tomb, was where Jesus and everything he represented was supposed to be. It’s what people had come to expect.

We don’t get to see the risen Jesus in today’s gospel lesson. In Luke’s gospel, disciples don’t find the risen Jesus. We can’t stop at the tomb—we have to keep looking, because that’s how he finds us.

Jesus finds us when we invite a stranger to break bread with us, like the two disciples on the road to Emmaus later that day. We’ve experienced that too, in our churches in Allendale, when we’ve welcomed homeless families to stay with us. There may be some who say that homelessness is just a fact of life, and that we can’t do anything about it. But we know different. Those of us who have been part of this ministry have experienced a remarkable community and hospitality that comes from spending time with these folks, and often they have as much or more to offer us as we have to offer them. Jesus is not there, dead in a dark tomb some 2000 years ago. He is risen! He’s alive, and he’s present wherever broken people like us, like those families, welcome each other and sit at table together.

Jesus finds us when we gather in community together, like the gathering of disciples he appeared to and said, “Peace be with you.” That’s been hard these past two years. It’s hard still, since COVID lingers on. Still, I’m grateful for the spirit that’s in this place…

The way the men of the church gathered last month, putting paint on doors, cleaning up diseased plants, and enjoying each other’s company, encouraging each other. It felt like we were repairing relationships and community, not just the property, after so much time apart. There are some who say church, and every viable institution in a capitalist society, has to be about the value proposition and what’s in it for me. But we know better. We know what it feels like to serve, and to be present for each other.

Today, Easter, we celebrate the astounding, joyful surprise: Jesus is not there, in the tomb, where they buried him, where he was supposed to be. Jesus is not there, in the tombs of our too small, cynical hearts, dark and constricted with indifference. Why do we look for the living among the dead? He is not here. He has been raised! And when we don’t stop at the tomb, when we keep looking, when we go out into the places where we’re not supposed to be either, the risen Jesus will find us and make our joy complete.